We give information about Alderney in two main ways. Although there is some overlap, they are largely complementary. The virtual tour (opens in new window)  uses a set of standard headings for each territory and, within these headings, presents what is essentially an illustrated slide-show, which can be viewed as a whole or by its sections. (If you have a slow internet connection, it may be easier to view the virtual tour.) The articles below are more variable in format and content, as indicated by the links. 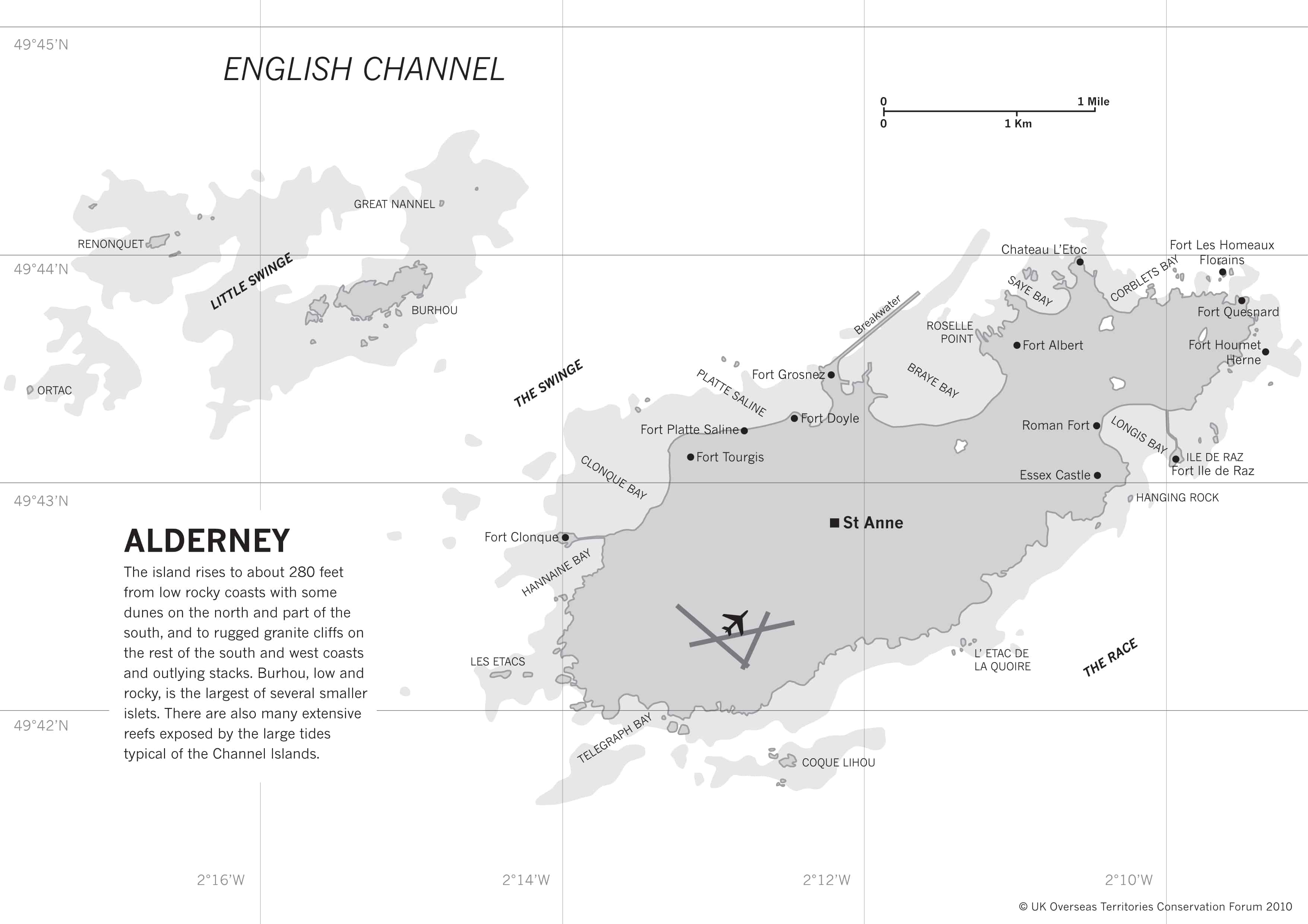 Its climate is temperate, moderated by the sea, and summers are usually warmer than elsewhere in the British Isles.

Alderney is similar to the other Channel Islands in having sheer cliffs broken by stretches of sandy beach and dunes. The highest point is on the central plateau of the island at 296 feet (90 metres).

Its surrounding islets support a rich flora and fauna. Trees are scarce, as many were cut down in the 17th century to fuel the lighthouses on Alderney and the Casquets. Those trees that remain include cabbage trees (due to the mild climate, often miscalled “palms” – but actually of the lily family), and there are some small woods dotted about the island. Wild flowers are particularly abundant and support a number of migrant birds passing through.

Seaweeds, sponges, sea anemones, molluscs, crustacean and fish are all found in abundance. Over 100 species of seaweeds have been identified. Ascophyllum nodosum has special importance because there is more than 75% of the world population in UK. Also there has been about 25-49% decline in numbers/range in Great Britain in the last 25 years of Halimenia latifolia. The seaweeds also play a very important role in supporting all the marine fauna in the area, and these fauna support the large bird populations.

For this reason, Alderney West Coast and the Burhou Islands were the first areas in the Bailiwick of Guernsey to be designated, in 2005, as a Ramsar Site (a Wetland of International Importance under the Ramsar Convention). Covering 1,500 hectares, the site extends from the waters of the island’s west coast, to the northern gannet colony of Ortac, Burhou and the islets and reefs that surround it, and the islet of Les Etacs. The site was designated for its rich wetland habitats: permanent shallow marine waters, marine subtidal aquatic beds, rocky marine shores, maritime cliff and slopes, and sand, shingle and pebble shores.

The site is an important breeding location for several species of seabird, including:

Puffins nest in underground burrows at Burhou, which can be reached only by boat.

Aside from seabirds, the Ramsar Site supports a diversity of marine species, such as sea anemones, kelp, sea urchins, and ormer.

The large tidal range not only creates nutrient-rich waters around Alderney, but it means that the scope for renewable energy is a tangible possibility. With tides rising and falling by as much as 6 metres and currents averaging 10mph, Alderney has one of the largest tidal resources in North West Europe. The waters around Alderney have the potential to deliver renewable energy to well beyond the Channel Islands, from the South of England to mainland Europe. However, this could have a detrimental impact on the biodiversity of the island. A number of explorations have begun.

On land, several species of small mammal are found, including:

Longis, located at the northern end of the island, is an important site for migrating birds. Woodland, coastal heathland and marine habitats occur at Longis, and the site has two freshwater wetlands which are important for waterfowl, including water rail, as well as shoveler, gadwall, teal, and mallard ducks. The range of plant and insect species is particularly impressive at this site, including the rare small hare’s-ear Bupleurum baldens and pyramidal orchids.

Val du Saou Nature Reserve is located in the southern part of the island. A smaller site than Longis, it is designated for its coastal woodland valley habitat. Val du Saou is an important site for migratory birds of prey, and Alderney’s only reptile, the slow worm, as well as a host of insect species.

Invasive plants, as on many islands, are a problem. A programme of invasive control such as for hottentot fig and New Zealand pygmyweed is undertaken, but it is limited in scope and resources, relying on university research work and volunteer ground work.

Alderney Wildlife Trust (AWT) is the key on-island body involved in nature conservation on Alderney. Its team works closely with the States of Alderney and they have carried out several projects together.

AWT carries out a variety of projects. One of its main core activities is the management and monitoring of the Ramsar Site.

As part of this it monitors the breeding success of the puffins and the other breeding seabirds. Puffins have been listed on the IUCN Red List as vulnerable due to global decline in the species, caused by human activity, including over-fishing and reduction in habitat.  AWT ensures that there are no visitors landing on the island during the breeding season, so that the birds are not disturbed. Adults and chicks feed on sand-eels found in the waters around Alderney. Around one hundred breeding pairs stay in the colony until July of each year. The fledglings will then remain out at sea until they are able to reproduce.

Live cameras placed close to some of the underground burrows enable children and other visitors to watch the puffins in their natural surroundings, while ensuring they have the solitude they need to successfully breed.

AWT actively manages the site at Longis using a small herd of Guernsey cattle to maintain the mosaic of habitats which support such a diversity of species.

Living Islands was a two-year programme funded jointly by the States of Alderney government and the Wildlife Trusts in the UK. The project aimed to highlight the natural and historical assets of Alderney and to encourage more visitors from the UK, France and northern Europe, which would in turn contribute to sustainable growth in the economy.

Recently AWT created Britain’s newest and most southerly accredited bird observatory. Alderney is becoming established as one of the most exciting islands in Britain for seeing and monitoring birds in migration and for nesting seabirds.