We give information about Gibraltar in two main ways. Although there is some overlap, they are largely complementary. The virtual tour (opens in new window)  uses a set of standard headings for each territory and, within these headings, presents what is essentially an illustrated slide-show, which can be viewed as a whole or by its sections. (If you have a slow internet connection, it may be easier to view the virtual tour.) The articles below are more variable in format and content, as indicated by the links.

Gibraltar is located on the southern end of the Iberian Peninsula at 36 08 N, 5 21 W, bordering the Strait of Gibraltar, which links the Mediterranean Sea and the North Atlantic Ocean. 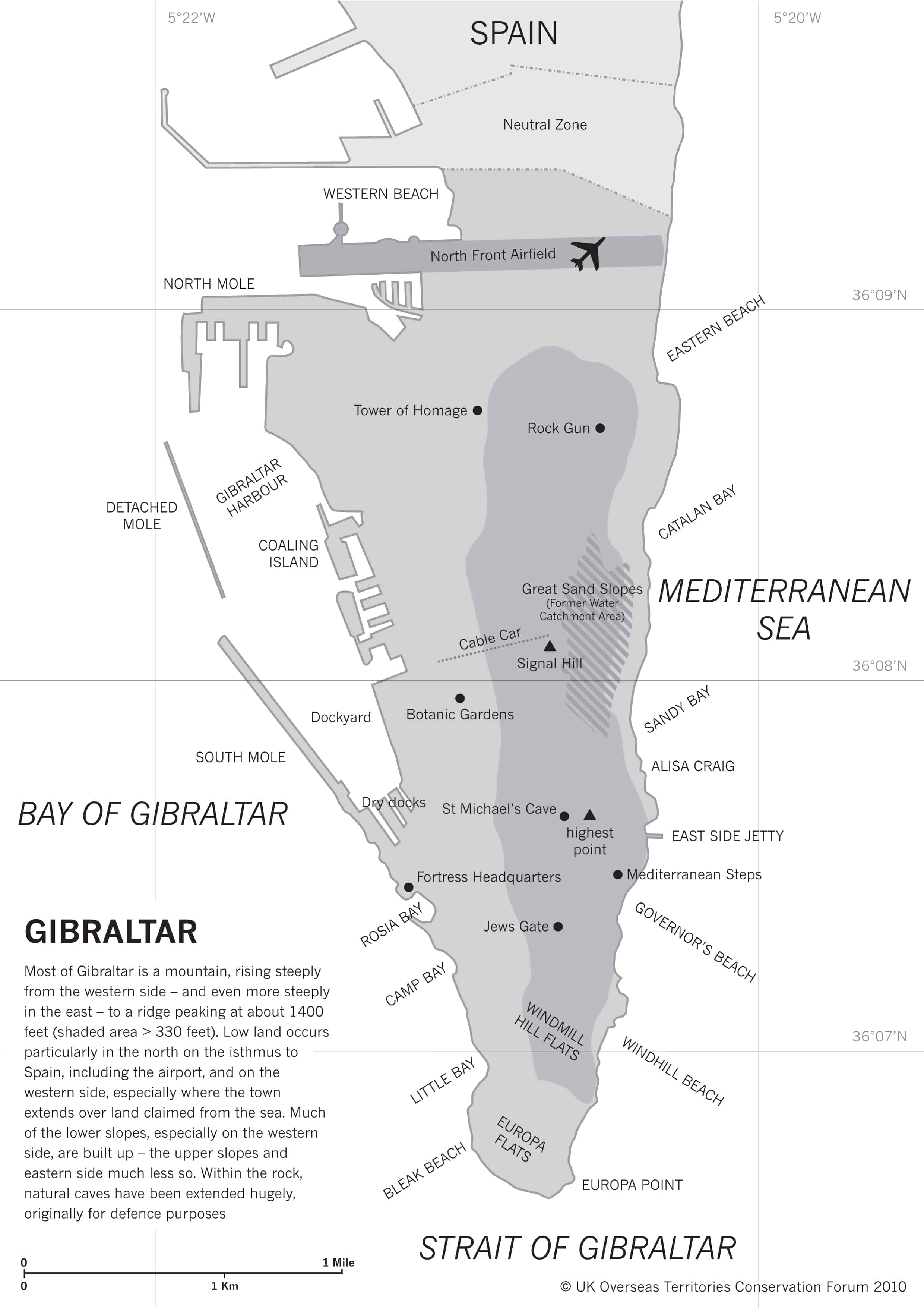 t is a narrow peninsula, 7km long, attached to Iberia by a low, sandy isthmus.  It has an area of 6.5 square kilometres and shares its northern border with Spain. The climate is Mediterranean, with mild winters and warm summers. The population was estimated to be 29,396 in July 2017. The financial sector, tourism, and the shipping sector contribute 30%, 30%, and 25%, respectively, of Gross Domestic Product (GDP). Telecommunications, e-commerce, and e-gaming account for the remaining 15% (Source: CIA World Factbook).

A Mediterranean wildlife community survives on the impressive limestone cliffs and slopes, with their scrub, patches of woodland, caves, and rocky shoreline. A steep cliff rises from the Mediterranean on the east to 398 metres.

On the west, the Rock slopes more gradually through scrubland, with the city (where most of the population live) nestled at the foot, partly on land reclaimed from the sea. To the south are a series of stony terraces.

Gibraltar is the narrowest crossing point for birds migrating between Europe and Africa. These include impressive numbers of short-toed eagles, black kites, harriers.

Rare species of fauna, some of which are endemic and some which are found nowhere else in mainland Europe, include the Gibraltar the Barbary macaque Macaca sylvanus and the Barbary partridge Alectoris barbara.

The Flora of Gibraltar notes that 691 species of terrestrial, vascular plants have been recorded from Gibraltar.  These include some endemic and restricted range species such as:

Gibraltar’s waters are home to dolphins and many other animals. Many migratory cetaceans such as fin whales, pilot whales, humpbacks occasionally traverse the Straits between the Mediterranean Sea and the Atlantic Ocean.

There remains a longstanding problem with fishing in Gibraltar’s territorial waters by Spanish fishermen, with an adverse effect on marine life. In 2011, the Southern Waters of Gibraltar were declared a Special Area of Conservation (SAC) and Special Protected Area (SPA). In 2014, the Government designated the entirety of British Gibraltar Territorial Waters as a Marine Nature Area.

During 2013, the artificial reef programme was re-invigorated by the Department of the Environment and Climate Change (DECC), with the creation of the North West Artificial Reef; the reef has proven to improve marine life in the area. Underwater cameras are used to showcase the marine life, which exists in Gibraltar’s waters. Re-introductions of species that were known to exist in the Bay are being undertaken. These include fan mussels, oysters and sea grasses, the latter species being a tremendously important source of food, oxygen and habitat as well as an excellent carbon sink.

Gibraltar, through the UK, recently designated Gorham’s Cave Complex as a UNESCO World Heritage Site. The Complex links the land and sea and contains four sea caves – Bennett’s, Gorham’s, Vanguard and Hyena – lying at the base of the eastern face of the Rock of Gibraltar. The caves lie within the youngest of five tectonic uplift blocks of the Jurassic limestone of the Rock. This represents the last 250,000 years of the history of the western Mediterranean, including a most important site for Neanderthal Man.

Gibraltar has a unique position in the European Union. Its Government aims to ensure compliance with all relevant environmental EU Directives, e.g. Birds and Habitats Directives, and that they are transposed in to local law.

Gibraltar is included in UK’s ratification of Ramsar, CBD, CITES, CMS, Eurobats and recently the Agreement on the Conservation of Cetaceans in the Black Sea, Mediterranean Sea (ACCOBAMS).

The Gibraltar Nature Reserve protects important plant and animal species. In 2013, through the Nature Conservation (Designation of Gibraltar Nature Reserve) Order 2013, the area was extended, so that 35% of total land area is now protected. The Reserve management plan contains a wide range of recommendations for the Upper Rock and other areas of ecological importance in Gibraltar.

Green space in Gibraltar is limited but there have been initiatives to address this. The Gibraltar Commonwealth Park was created in 2014 on derelict land and has become one of Gibraltar’s prime recreational areas. In addition, an urban planting programme has resulted in a total of 158 trees being planted around Gibraltar.

The key governmental and non-governmental bodies involved in nature conservation in Gibraltar are:

A virtual tour for Gibraltar, outlining its historical and cultural importance is in draft and will be available in due course.