We give information about the Isle of Man in two main ways. Although there is some overlap, they are largely complementary. The virtual tour (opens in new window) uses a set of standard headings for each territory and, within these headings, presents what is essentially an illustrated slide-show, which can be viewed as a whole or by its sections. (If you have a slow internet connection, it may be easier to view the virtual tour.) The articles below are more variable in format and content, as indicated by the links.

The Isle of Man is situated in the northern part of the Irish Sea, nearly equidistant from England, Wales, Scotland, and Ireland at 54 15 N, 4 30 W. 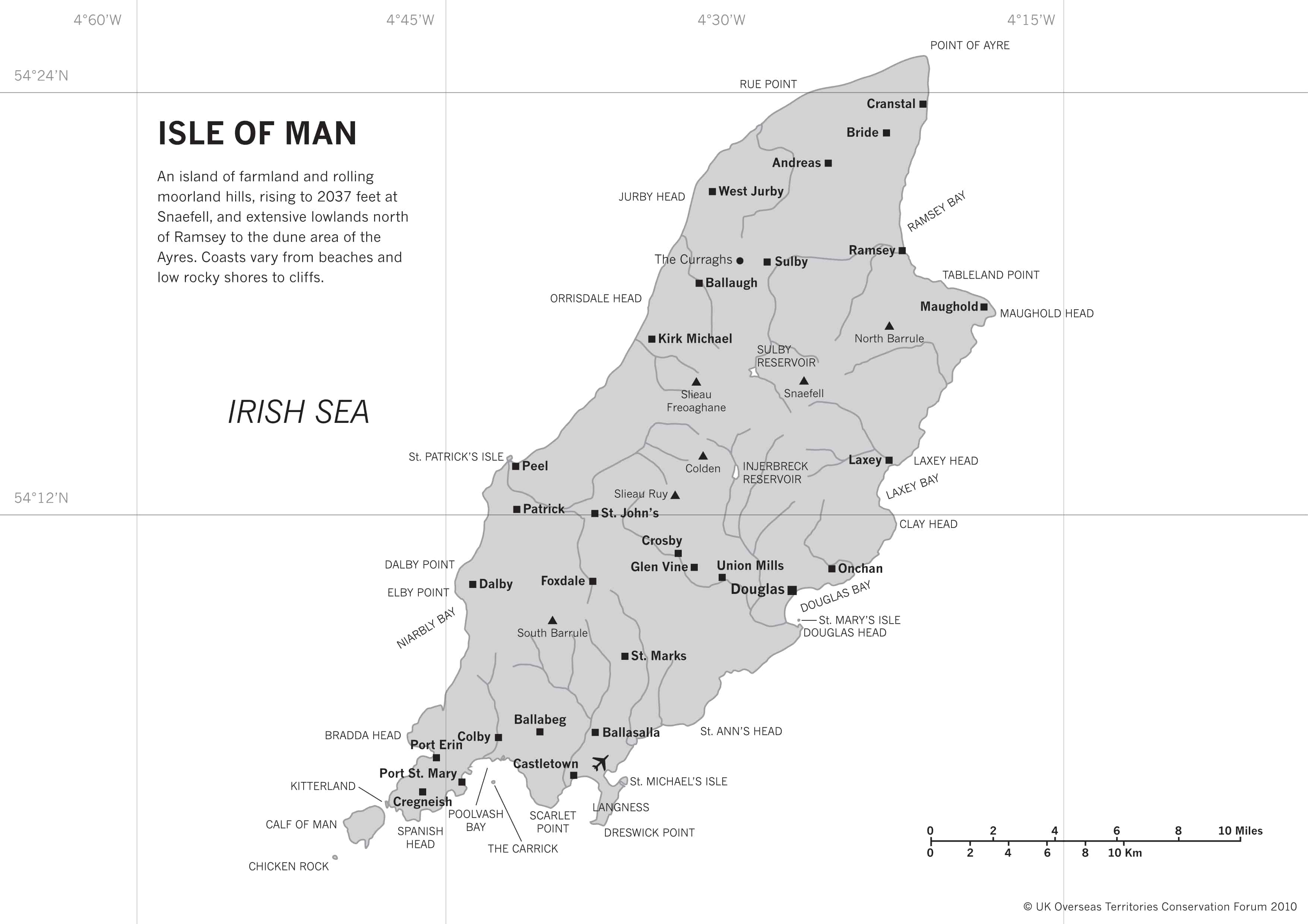 It is 53 km long, with an area of 572 square kilometres and 120km of coastline. The climate is temperate, with cool summers and mild winters. More than 40% of the Island is uninhabited hill land. Snaefell is the highest point, at 621m. An islet known as the Calf of Man is located off the southern end of the island.

Isle of Man is a British Crown Dependency but is not part of the UK or of the EU. However, the UK Government remains constitutionally responsible for its defence and international representation.

The geology of the island consists of mostly built up layers of ancient mudstones and sandstones from the Ordovician/Silurian period. Carboniferous Limestone occurs along the south coast and off-shore. The northern plain is composed of glacial tills, gravels and outwash sands, with the remains of several pro-glacial lakes and a series of small glacial features. Large areas of impeded drainage caused the formation of extensive peat-filled wetland areas, although most has been drained, significant areas of lowland peat remain.

Its human population was estimated at 88,815 in July 2017. Financial services, manufacturing, and tourism are key sectors of the economy.

The Island supports a great diversity of wildlife, from grey seals and basking sharks, to the protected lesser mottled grasshopper of Langness. The island is home to many different bird species, including chough, peregrine falcon, long-eared and short-eared owls, puffin, and Manx shearwater.

Ballaugh Curraghs, so far the island’s only Ramsar Convention Wetland of International Importance, is a large marshland in the north of the island. It has had the largest recorded hen harrier roost in Western Europe. This reserve and the Calf of Man (on which there has been a bird observatory for more than 50 years) are among the sites managed by the Manx Museum. The Isle of Man Department of Environment, Food and Agriculture (DEFA) manages the hills and glens, and has designated the Ayres as a National Nature Reserve for its extensive coastal heath, dunes, and shoreline with breeding little terns. Other statutory protected sites include Langness, Greeba mountain, and Dalby Coast. The Manx Wildlife Trust manages 20 reserves across the Island, including the famous orchid meadows at Close Sartfield.

The Island’s Biodiversity Strategy 2015-2025 provides an account of the Island’s biodiversity and sets out a vision that by 2050:

Manx biodiversity will be valued, conserved, restored, and managed sustainably, able to adapt to unavoidable change, provide essential services and contribute to a high quality of life for all.

The economic value of the main habitats in the Isle of Man was recently estimated at a minimum of £42 million annually (Source: Brander and McEvoy (2012).

Species occurring here, listed by the IUCN as Globally Threatened (Critically Endangered, Endangered or Vulnerable) or Near Threatened or listed by OSPAR as Threatened and/or Declining Species include:

Species that are less threatened globally (IUCN, Least Concern) include:

Other species and habitats of international significance include:

Under the Manx Wildlife Act 1990, the Ayres is a designated National Nature Reserve and there are 21 Areas of Special Scientific Interest (ASSI).

Offshore, the sea-bed has a great variety of substrates and, although there are strong tidal currents, there are areas of biogenic reefs and kelp forests that provide habitats for many varied and colourful species (Source: Manx biodiversity.)

The waters around the Isle of Man are very popular with scuba divers. In summer months, the island is a popular tourist destination due to its marine mammal visitors.  British waters, especially around the Isle of Man, appear to hold one of the largest populations of basking sharks Cetorhinus maximus in the world. These close relatives of the great white shark are entirely harmless plankton feeders. Very little is known about basking sharks – except that they are possibly under threat of extinction as they get caught accidentally and deliberately. Previously killed for their oil-rich liver, they are now harpooned for their fins; once the tail and fins are cut-off (for shark fin soup) the shark, sometimes still alive, is thrown back to sea. Basking sharks are gradually disappearing from areas where they were previously common.

The zones within the Ramsey Bay reserve provide a full range of protection, from no-take through to managed use, appropriate to the features being protected. Conservation features protected include horse-mussel reefs, seagrass-beds and maerl (rhodolith) beds. One of the zones is a Fisheries Management Zone which is managed by the Manx Fish Producers’ Organisation (MFPO). The fishermen opted to keep the zone closed to all mobile-gear fishing for 4 years. In 2013 and 2014, limited fishing was permitted by MFPO members. Strict quotas were set by the fishermen, based on scientific surveys carried out by the Government and fishing industry surveys carried out by fishermen. Fishing activities were timed to coincide with premium prices for scallops on the Christmas market, and fishermen co-operated to pool individual quotas, reducing fuel costs and maximising profits. Fishermen have limited fishing to a small proportion of the total area available to them, effectively extending the conservation zones of the RMNR. RMNR took 3 years to establish, from the start of the project to designation of the Isle of Man’s first Marine Nature Reserve. RMNR demonstrates the benefit of investing time and resources to work in close partnership with the fishing industry and other stakeholders for conservation and fisheries sustainability outcomes.

In contrast but moving towards comparable lines, the Baie ny Carrickey Closed Area (BNCCA) grew out of a gear conflict situation and public concerns about the marine environment. A community committee of stakeholders representing fisheries, recreational and environmental interests decided on the area. As a result of the consensus reached by the community committee, the Government was able to implement rapidly the BNCCA as a trial designation with relatively little further consultation. The designation began as an area closed to trawling and dredging. The next stage was led by a group of fishermen who formed an association to manage pot-fishing within the area. Working with the Government and Bangor University scientists, the pot-fishermen now carry out regular monitoring and fisheries surveys within the Bay, and have implemented stricter management controls such as increased Minimum Landing Sizes for lobster and reductions in fishing effort. New initiatives include the development of a protected zone for sea-grass, a habitat survey and other proactive measures initiated by the fishermen’s management association. BNCCA is an example of a community-led initiative that resulted in the rapid designation of an MPA with fisheries and conservation benefits.

Manx Nature Conservation Forum was formed to bring together all groups and organisations, holding data on the biodiversity on the Isle of Man, in order for stakeholders to work more closely together. They include:

In 2012, the Isle of Man, through the UK, joined the Convention on Biological Diversity. This was the culmination of tireless efforts of conservation practitioners on the island and shows the IoM’s Government’s ambition to highest international standards of environment stewardship. In 2016, the Isle of Man designated a UNESCO Man and Biosphere Reserve, the first entire Island Nation to gain this status. The main purpose of Biosphere Reserves is to “encourage conservation, sustainable development and active involvement in the environment.”