We give information about Jersey in two main ways. Although there is some overlap, they are largely complementary. The virtual tour (opens in new window)  uses a set of standard headings for each territory and, within these headings, presents what is essentially an illustrated slide-show, which can be viewed as a whole or by its sections. (If you have a slow internet connection, it may be easier to view the virtual tour.) The articles below are more variable in format and content, as indicated by the links.

The largest of the Channel Islands, Jersey is situated in the Bay of Mont St Michel, and is little more than 20 km from the northwest coast of Normandy, France, at 49 15 N, 2 10 W. 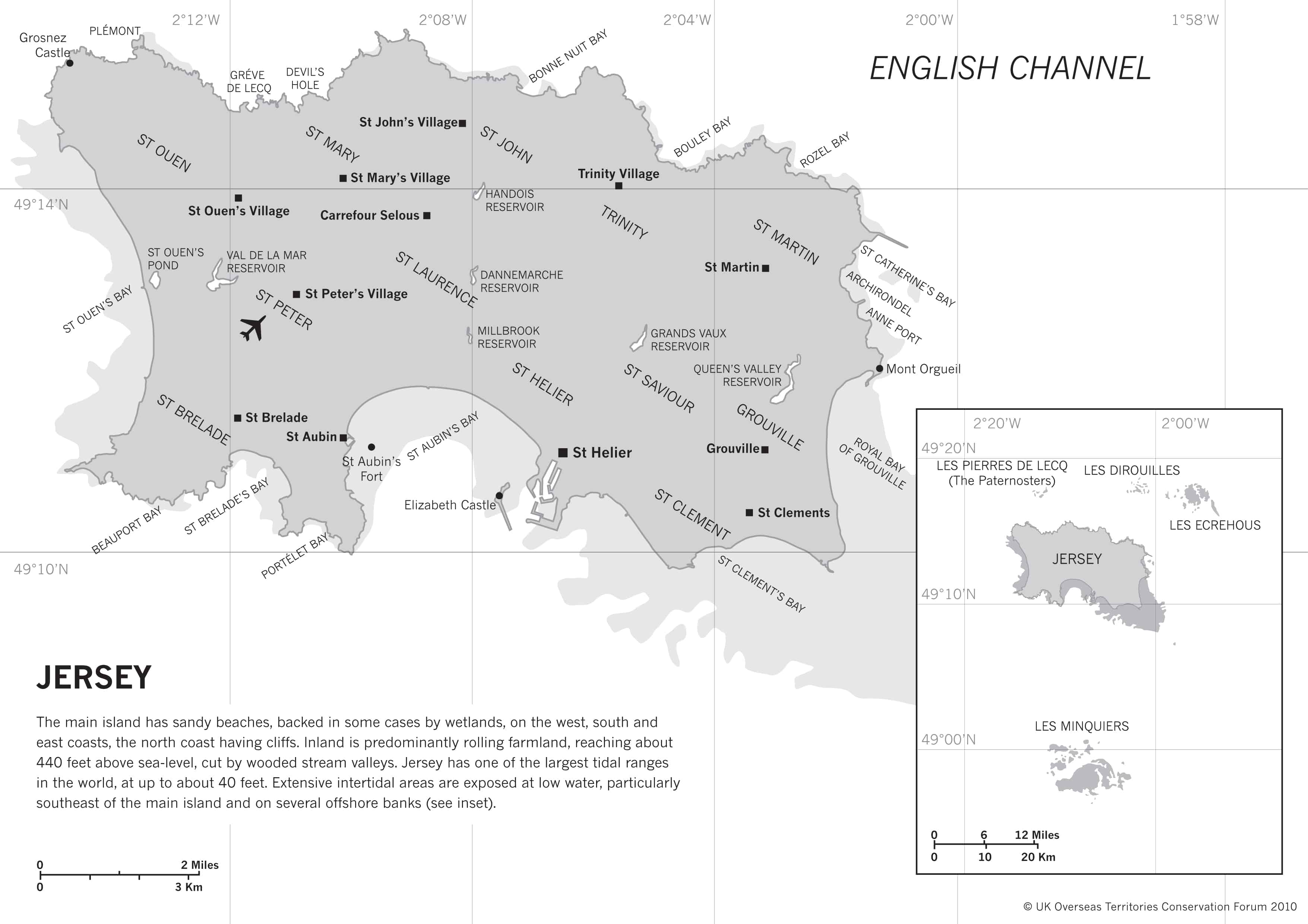 The Bailiwick of Jersey is a British Crown Dependency, an independently administered jurisdiction, neither part of the UK nor the European Union. The UK Government is constitutionally responsible for its defence and international representation.

It has a land area of 117 square kilometres. The underlying geology is largely granite and shale. The overlying soils vary between areas of clay, sandy loess, and alluvium with acid soils, particularly over the granite. The climate is milder than that of Great Britain, with mean temperatures of 7°C in January and 18°C in August. Summers are generally warm and dry, with the occasional drought. Winters are usually mild, but with frosts in some years. The island slopes from a height of 153 m on the north coast to 60 m above mean sea level in the south.

Financial services, agriculture, and tourism are the main areas of economic interest. The island’s population density is double that of England and a quarter less than Guernsey (97,857 in 2011, with approximately 600,000 visitors per year, with 20% of the area urban). The area of farmland is 54% of the Island, and a still considerable area (26% of the land) of semi-natural habitats. Jersey is extremely well connected to the outside world, because of the needs of the finance industry and tourism. [Source: CIA Worldfactbook].

Jersey’s geographical position partly explains the large number (33) of UK Red Data Book species supported. Species include four reptiles (two lizards, the green (pictured) and wall, not found in the UK), two amphibians (including the agile frog, which is not found in the UK), the red squirrel, several invertebrates rare or not recorded in UK e.g. Jersey tiger moth, and a rich orchid and lichen flora, not to mention the rich marine life, such as red starfish.

Additional planning protection is provided for the large, relatively undeveloped western coastal plain and scarp slopes. As well as the dunes and dune grassland, the area contains the largest natural fresh-water body in the island: St Ouens Pond which is 4.5 ha, surrounded by 9.0 ha of reed beds.  The associated wet meadows, with a rich orchid flora; loose-flowered or Jersey orchid (see banner image at top) and the dune grassland make this an exceptionally rich area botanically.

Numerous activities are carried out by conservation bodies to protect Jersey’s wildlife and habitats. Some recent examples build on strong partnerships are: