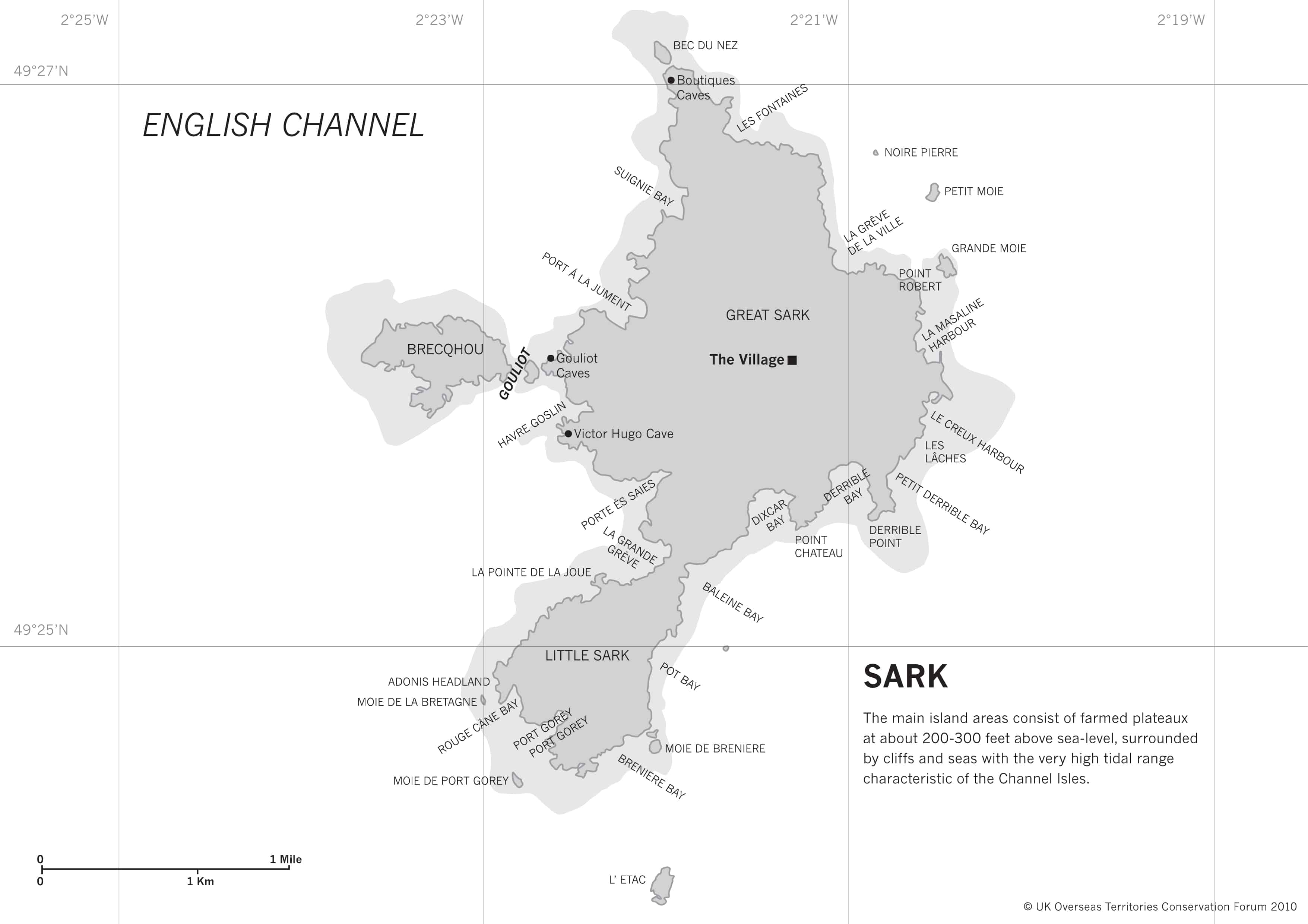 The island, which is 5 km long and 2.4 km wide at its broadest point, consists of two components, Great Sark and Little Sark, which are connected by La Coupée, a 90m-long isthmus that is only about 10m wide. The smaller, privately owned island of Brecqhou is separated from Great Sark by the narrow Le Gouliot Channel. The island is essentially a plateau rising to 114 metres, with a scenic coast encircled by precipitous cliffs.

Under the Ramsar Convention, a Wetland of International Importance was designated in 2007 at Gouliot Caves and Headland. The caves are a unique site, a consequence of Sark’s cliffs and geology interacting with the huge tidal range. The site consists of a headland in Sark with a series of large caves penetrating it. These extend from above high-water mark to below low-water, with a very rich fauna. Much of this fauna is of otherwise submarine species, particularly noteworthy are sponges (Porifera) and sea anemones and hydroids (Cnidaria).

Not only does this site hold a remarkable diversity of these animals, but it is also a site where the exceptionally large tidal range, combined with the constancy of a cave situation, mean that these animals can be viewed at low-water. Because of this, these caves are also the site where many of these animals were first described and studied, in the 19th and early 20th centuries, before sub-aqua equipment was readily available.

Local expert Susan Synnott has published ‘Wild Flowers of Sark’. In it she describes the island as:

a showcase of wild flowers growing naturally as, unlike in other parts of Europe, the island has never gone in for intensive farming. The hedgebanks have been retained, the fields are small and irregular, the borders of the fields have largely been left to nature, and the cliff tops are almost entirely undeveloped.

Over 160 species of wildflowers can be found here, varying through the seasons and depending on the location. Sark Tourism notes that in summer, foxgloves and the oxeye daisies are seen all over and above the cliffs as are thrift, thyme, rock samphire Crithmum maritimum and the rarer Golden Samphire Inula crithmoides.

Carpobrotus edulis and Japanese Knotweed are problematic invasive species on Sark. Work is ongoing to address the spread of these.

The planting of vines on large parts of Sark owned by absentee landlords is a concern due to agricultural run-off and associated water pollution.

A Vision for Sark takes in to account the needs of the environment, and need for a marine spatial plan. The document also discusses the need to encourage more environmentally friendly waste-management techniques, as part of a new planning system, as well as draft septic tank legislation, and a review of discharges into the sea. Sustainable means of transport are the norm, as cars are not allowed on the island.

Société Sercquiaise is affiliated to La Société Guernesiaise, which exists to encourage the study of the history, natural history, geography and geology of the Bailiwick of Guernsey, the conservation of the Bailiwick’s natural environment and the preservation of its historic buildings and monuments. Species records, as well as other data is held in the Guernsey Biological Records Centre.

The absence of street lighting and cars on Sark means that the skies are notably dark.

The local community, as well as tourists to the island, travel around on foot or by bicycle and, after it gets dark, torch-light is used. As a result, the night sky is a natural wonder virtually unspoiled by light pollution.

The International Dark-Sky Association (IDA) aims to preserve and protect the night time environment and heritage of dark skies. The IDA designates Dark Sky sites after an application is received which demonstrates community support and documents to support their programme requirements. The IDA believes that a Dark Sky Places designation helps “enhance the visibility of designated location and foster increased tourism and local economic activity”.

On Sark, the application to become a Dark Sky Island involved the development of a Lighting Management Plan and island-wide publicity to explain what the Dark Sky designation would mean for the island, which the islanders fully supported.

As a result, in 2015, Sark became the first Dark Sky Island.

A virtual tour for Sark, outlining its historical and cultural importance is in draft and will be available here in due course.

Skilled film-maker, Sue Daly, is based on Sark and has made available her short videos on the Return of the Crawfish and Project Sunflower…