We give information about Ascension Island in two main ways. Although there is some overlap, they are largely complementary. The virtual tour (opens in new window)  uses a set of standard headings for each territory and, within these headings, presents what is essentially an illustrated slide-show, which can be viewed as a whole or by its sections. (If you have a slow internet connection, it may be easier to view the virtual tour.) The articles below are more variable in format and content, as indicated by the links. 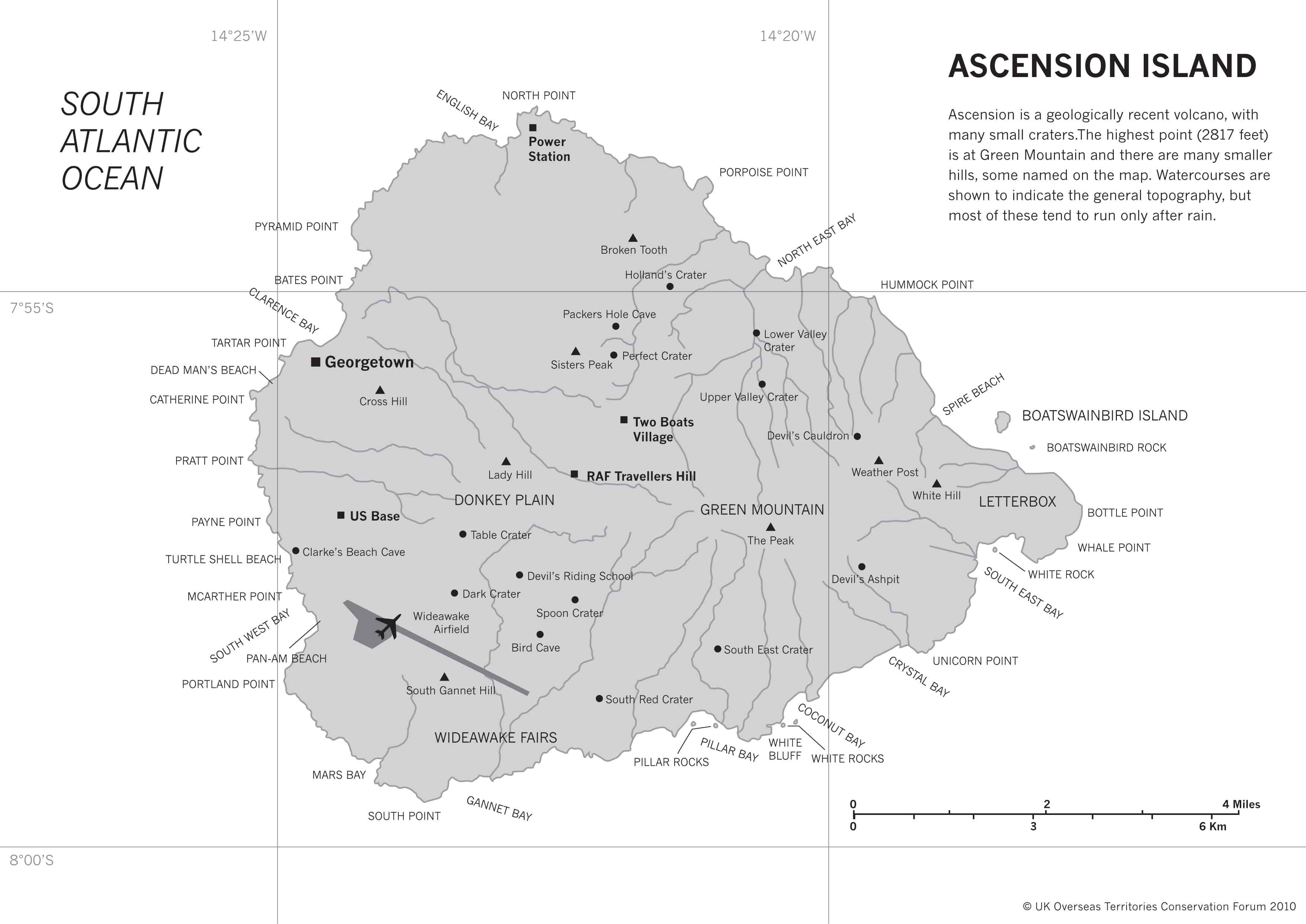 The Territory consists of the main island of Ascension, which covers an area of 88 km2, and several smaller associated stacks and islets around the coastline, including Boatswain (pronounced Bosun) Bird Island (<1 km2), which is the largest of these. Ascension’s marine area covers 445,390 km2.

Ascension has a human population of 806 (2016). Since a change in UK Government policy in the early 2000s, these are deemed not to be permanent residents; all land is owned by the government and, civilians may reside only as long as they have a work permit. There are two military bases (UK and US), two settlements (Georgetown and Two Boats) and various stations related to telecommunications. Main income is created through the military presence on the island, and the BBC World Service’s Atlantic Relay station. Some revenue has also been generated through the distribution of fishing licences.

The Island has a tropical marine climate with relatively little variation in temperature throughout the year, staying between 22-31°C, reaching highs of 31-32°C from January to March. Strong prevailing south-easterly trade winds blow consistently across the island but humidity remains around 68% for most of the year. Annual mean rainfall is 142 mm in the lower regions and is variable in its distribution patterns throughout the year. The island’s peak, Green Mountain has its own microclimate with 680 mm of rainfall annually, and the accumulation of cloud and mist has resulted in up to 100% humidity.

Ascension is a volcanic island created by a hotspot (now 250-300 km to the east of the island) around 1 million years ago. Although there are lots of vents on the island, it is a single volcano with the central and eastern parts comprised of pyroclastic flows, and the rest consisting of scoria cones and mafic lava flows. There has been no reported volcanic activity since the island’s discovery in 1501, although some the youngest lava flows may be less than 1000 years old. The island consists of a wide range of alkaline rocks atypical for oceanic islands, ranging from basalt through trachyandesite and trachyte to rhyolites.

The island has a varied landscape, ranging from arid lava flows with no vegetation or only highly resilient plants to, within the Green Mountain region, a combination of woodland, grassland and scrubland, including a lush cloud forest. It also has one of the world’s most heavily invaded terrestrial ecosystems; more than 95% of plant species are introduced. Ascension has deep inshore waters and no coral reefs.

The island is one of the most important tropical seabird nesting stations in the Atlantic Ocean, supporting almost 500,000 pairs of 11 breeding species. These include the endemic Ascension frigatebird and a distinct sub-species of band-rumped storm petrel, along with boobies, terns, tropicbirds and noddies. It hosts also the second largest breeding population of green turtles in the Atlantic (largest of any in the UKOTs), with the Island’s 3 main turtle nesting beaches collectively supporting more than half of all green turtle nesting in the South Atlantic. During the 19th and 20th centuries, harvesting of nesting female sea turtles for meat led to a huge depletion of the green turtle population. Harvesting ceased in the 1930s and they are now fully protected under local legislation, with the nesting population having increased 6-fold with approximately 3750 nests now laid annually on the island.

The slopes of Green Mountain are the centre of botanical diversity within the Territory, including the cloud forest at the summit. Green Mountain comprises of a novel ecosystem of introduced trees, shrubs and grasses, with native habitats surviving in only a few isolated locations on the most exposed slopes and outcrops. 25 vascular plant species are believed to be native, 10 of which are endemic, although 3 are believed to be extinct and the remaining 7 are on the IUCN’s Red List of Threatened Species. The island is home also to at least 15 endemic bryophytes and 28 invertebrates, although these numbers are likely to increase with current research efforts.

Inshore marine life has comparatively low species diversity relative to other tropical islands but a high abundance, including 11 fish endemic to Ascension and a further 16 endemics shared only with St Helena. The offshore area also supports tuna stocks, multiple bill-fish, shark and marine mammal species. A licensed, foreign-flagged, commercial longline fishery for tuna operated in the waters around Ascension Island from 1988-2004, and then again from 2010-2013. As of December 2015, the commercial fishery re-opened in 50% of the Exclusive Fishing Zone (EFZ), with the remaining 50% of the zone closed to commercial fishing. This forms part of the first step in the UK Government realising its manifesto commitment for a Marine Protected Area around Ascension, and a ‘Blue Belt’ around its Overseas Territories more generally.

Invasive alien species constitute the most immediate threat to the ecological integrity of the island. Over 95% of Ascension’s flora is introduced and, whilst some coexist in this novel ecosystem, others have become highly invasive, posing a threat to the native biodiversity. Mexican thorn (or mesquite) is one of the most aggressive, outcompeting native vegetation in the area that it invades, forming dense impenetrable thickets that limit access and provide food and habitat for high densities of rats. At least 9 introduced vertebrates, including rabbits, rats and feral sheep are present on the island, with cats and goats having previously been eradicated. The introduction of cats in the 1800s led to rapid population declines of seabirds nesting on the mainland. Numbers are currently increasing following the removal of the feral cats in 2004. Introduced black rats are still affecting breeding populations of seabirds and turtles, although the extent to which is currently unquantified. Climate change poses a potentially significant, but unpredictable, long-term threat.

Poor runway conditions at RAF Ascension Island in April 2017 led to the cancellation of twice-weekly flights from there to the UK and the Falkland Islands. Although the runway is scheduled to reopen in 2020, the uncertainty led to the closing of the only hotel on the island in 2017.

Conservation efforts are led on-island by the Ascension Island Government’s (AIG) Conservation and Fisheries Department (established in 2001) supported by guidance and expertise of overseas organisations. Efforts are underpinned by local legislation including the Wildlife Protection Ordinance, 2013, National Protected Areas Order, 2014, Fisheries (Conservation and Management) Ordinance, 2015 and Control of Trade in Endangered Species Ordinance, 2015. In the past, activities such as sand mining and unregulated development related to the island’s use as a military base and telecommunications hub, have impacted some of the Island’s most important wildlife habitat. However, the protected areas legislation now protects 20% of Ascension’s land area and key biodiversity sites (1 National Park, 6 Nature Reserves and 1 Sanctuary), including the 3 main turtle nesting beaches, 3 key areas for seabird nesting (also recognised as Important Bird Areas), and Green Mountain National Park. Many of these areas are also recognised as qualifying as components of a Ramsar Convention Wetland of International Importance.

The first national Biodiversity Action Plan for the island was published in 2015, as part of a Darwin Initiative-funded project. In its initial iteration, the BAP targets 13 indigenous and endemic species that are regarded as particularly important because they are threatened with extinction, or because they are “flagships” for more general conservation issues facing specific taxa or ecosystems.  In addition, the BAP identifies four priority habitats and ecosystems where important assemblages of endemic and indigenous species are facing common threats and can be conserved through a common set of actions. Two introduced species are also singled out for attention because of the magnitude of their impacts on the ecology of the Territory.

The Ascension Island Seabird Restoration Project was instrumental in setting up the local Conservation Office and a formalised seabird monitoring programme, as well as tackling the threats to seabirds from introduced, invasive species. Led by the RSPB, with funding from the FCO, and support from numerous other bodies including UKOTCF, in 2001, a feral cat control programme was initiated and the island was declared feral cat-free in 2006. Seabird recolonization of accessible mainland sites was first recorded in 2002 and the numbers have increased steadily since.

The OTEP-funded “An Ecosystem Approach to Plant Conservation on Ascension Island” project (2011-2013) helped to advance plant conservation and restoration techniques on the island, setting up current practices that include propagation and restoration as well as in-situ conservation. Methods encompass an ecosystem approach for the coexistence of native and non-native flora, with the control of invasive species.

Operation Land Crab was initiated in 2013 with funding from Fauna and Flora International and the Darwin Initiative to collect data on the ecology, distribution and conservation status of the iconic land crab for which little was known.

Ascension Island Marine Sustainability (AIMS) project, funded by the Darwin Initiative, saw the establishment of a vibrant marine research and conservation programme within the AIG Conservation Department. This included a comprehensive baseline survey of the shallow marine biodiversity of Ascension, habitat inventories and mapping, and the increased on-island facilities and capacity for carrying out the work. This project was succeeded by the Ascension Island Ocean Sanctuary (AIOS) project, funded by the Darwin Initiative, for the designation of a large-scale pelagic marine protected area at Ascension, underpinned by strong science and long-term monitoring and enforcement capabilities.

The Government Conservation Department endeavours continually to raise public awareness of the island’s marine and terrestrial wildlife including: the running of a holiday activity club for school children, articles in the local newspaper, and public meetings. The Department has an active presence on social media.

2015, UKOTCF, together with many partner organisations in the UKOTs, helped Stewart McPherson with his project Britain’s Treasure Islands. As part of this, we provided information and images for, and helped to fund, a series of mini documentaries on the premise that they would be open source so that everyone could enjoy them.