We give information about South Georgia and the South Sandwich Islands in two main ways. Although there is some overlap, they are largely complementary. The virtual tour (opens in a new window) uses a set of standard headings for each territory and, within these headings, presents what is essentially an illustrated slide-show, which can be viewed as a whole or by its sections. (If you have a slow internet connection, it may be easier to view the virtual tour.) The articles below are more variable in format and content, as indicated by the links.

British Antarctic Territory is an area of Antarctica that is administered by the United Kingdom in London by staff in the Polar Regions Department of the Foreign and Commonwealth Office. It consists of all the land (including the Antarctic Peninsula and many offshore islands), south of 60°S latitude and between longitudes 20°W and 80°W, an area of 1,709,400 km2. 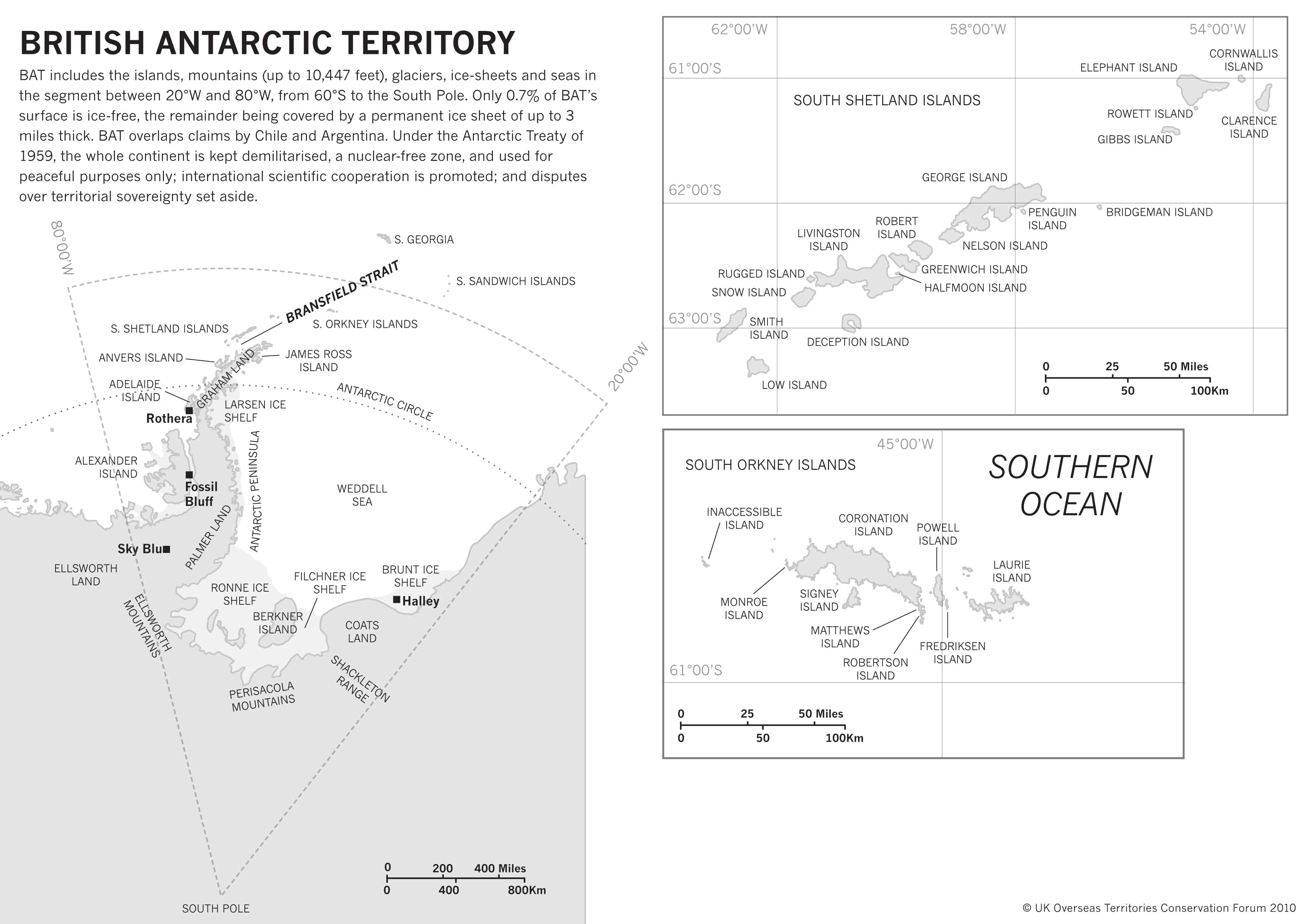 Although the area was explored much earlier by adventurous travellers and whalers, the territory was officially formed in 1962. The UK is a signatory of the Antarctic Treaty which was signed in Washington in 1959. Some of the most important articles in the Treaty are:

Antarctica shall be used for peaceful purposes only

Freedom of scientific investigation in Antarctica and cooperation towards that end..shall continue

Although the UK claim overlaps with those of Argentina and Chile, the Antarctic Treaty effectively suspends these claims and provides an internationally agreed regime for the whole continent. There are no native human inhabitants in BAT and the islands are used mainly to give access to the scientific research stations in the Antarctic – there are two year-round (Halley and Rothera) and one summer-only (Signy) UK research stations here. Many other countries also have research stations in this region, as the Southern Ocean offers unique opportunities for understanding evolution in marine systems.

The Protocol for the Protection of the Antarctic Environment, enacted as the Antarctic Act 1994, provides a licensing regime for all activities in the Territory by British nationals. This legislation covers also environmental monitoring and impact assessment, waste management, oil spills and protected areas and species. The British Antarctic Territory Strategy sets the main objectives and funding priorities for the territory and is reviewed annually and updated as appropriate.

Most of the landmass in the Antarctica is permanently covered with ice. However, life is still present in the 1% of the region that is ice- and snow-free. In these areas, there are large numbers of seals, penguins and birds, as well as a variety of mosses, liverworts, lichens and fungi.

British Antarctic Survey notes that there are:

They can tolerate low temperatures and dehydration, being specially adapted to surviving in extreme environments. Trees and shrubs do not grow in these conditions. There are only two species of flowering plants that occur in Antarctica, the Antarctic hair grass and Antarctic pearlwort. These arise along the warmer parts of the Antarctica Peninsula and in the South Orkney Islands and the South Shetland Islands. Human activities such as whale and seal hunts and the more recent waves of tourists have unintentionally carried non-native species into these regions. Invasive species are the biggest threat to the native flora of Antarctica.

The terrestrial fauna of the Antarctic continent is sparse; no higher insects are present, while micro-arthropods are restricted to limited areas of vegetation and (vertebrate) nutrient enrichment. In the most extreme continental cold deserts, simple food webs consist of as few as 1 – 3 nematode species, only one of which may be predatory. These cold desert soils are faunistically the least diverse habitats on Earth.

In the surrounding seas, vast quantities of krill provide the basis for rich marine life. This includes whales, seals and very large numbers of birds, especially petrels and penguins, inhabiting the islands and coastal areas of the Peninsula. Adélie and emperor penguins, and Antarctic snow petrels, all breed on the continent itself, and chinstrap, gentoo and macaroni penguins breed on the northern tip of the Antarctic Peninsula, where conditions are less harsh.

Management of commercial fishing is by international agreement through the Convention for the Conservation of Antarctic Marine Living Resources (CCAMLR). Annual meetings of the Treaty and CCAMLR provide a forum for monitoring environmental activities and fishing. The UK’s Foreign and Commonwealth Office Polar Regions Department takes the lead on matters relating to CCAMLR.

The UK Antarctic Heritage Trust works to preserve, enhance and promote British heritage to engage, inform and inspire a global audience. It cares for and conserves historic buildings and artefacts in Antarctica, including their flagship historical site, Port Lockroy. For more than a century, Port Lockroy has been a home for explorers, whalers, scientists, and sailors who have made vital contributions to Antarctic history and the harbour, at the meeting point of 3 seaways has become the most popular visitor destination in Antarctica today, complete with museum, shop and post office.

In 2015, UKOTCF, together with many partner organisations in the UKOTs, helped Stewart McPherson with his project Britain’s Treasure Islands. As part of this, we provided information and images for, and helped to fund, a series of mini documentaries on the premise that they would be open source so that everyone could enjoy them.