We give information about the British Indian Ocean Territory in two main ways. Although there is some overlap, they are largely complementary. The virtual tour (opens in a new window) uses a set of standard headings for each territory and, within these headings, presents what is essentially an illustrated slide-show, which can be viewed as a whole or by its sections. (If you have a slow internet connection, it may be easier to view the virtual tour.) The articles below are more variable in format and content, as indicated by the links.

The British Indian Ocean Territory (BIOT) is located about 1500 km from the southern tip of India, 3400 km east of Africa and 3000 km west of Indonesia. The territory comprises the 55 islands of the Chagos Archipelago. It consists of five atolls, including The Great Chagos Bank – the largest atoll in the world. While the land area is only 44 km2, below the territorial seas lie over 60,000km2 of coral reefs, which comprises over 10% of Indian Ocean reef cover, and the cleanest seawater ever recorded. 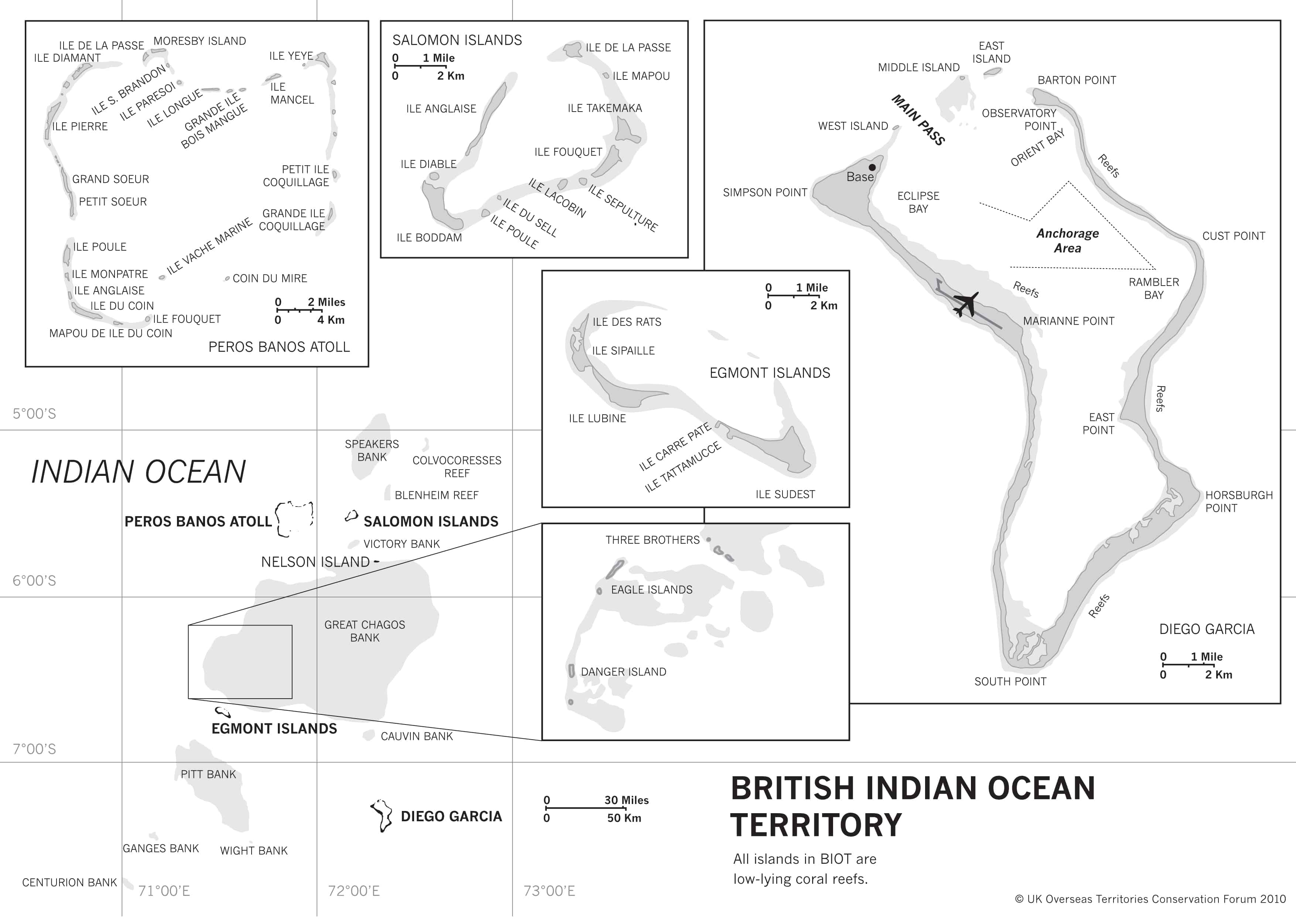 Additionally there are vast deep-sea plains and limestone platforms, as well as 86 sea mounts and 243 deep sea-knolls. The territorial waters (640,000 km2) form one the world’s largest ‘no-take’ marine protected areas, encompassing almost the entire Exclusive Economic Zone. The archipelago is very diverse, with a range of coral atolls, banks and reefs. The reefs are rich in benthic and pelagic life and represent some of the least disturbed reefs in the Indian Ocean basin.

BIOT once had an indigenous population but today the islands are uninhabited, except the largest, Diego Garcia (16 km2), which is used by the US and UK for military purposes and is administered by a Commissioner from the UK. Access is restricted to the islands and a permit is required in advance of travel from the Administrator (greater detail is provided in our virtual tour ).

The Great Chagos Bank is the largest coral atoll in the world, partly submerged, but with some very shallow features, including small islands on its northern and western rim. The archipelago possesses an exceptionally low level of pollution and provides a standard for measuring the impact of human pressures on other reef systems. Most of the islands are classic coralline, composed of coral rock and sand. However, in southern Peros Banhos and north-western Great Chagos Bank, there are a few small islands which have undergone minor uplift to heights of about 6m above sea level. On Eagle Island, there is an unusual feature of a peat deposit on a coral atoll. Many of the islands have lost their native vegetation as a result of conversion to coconut plantations. Now abandoned, these have remained, although patches of native hardwood remain, and The Brothers have very small, but almost entirely undisturbed, coral-island-hardwood forests.

It is probably less than 4000 years since the islands had sufficient soil to support certain flora. No endemic species of plant has been recognised on the islands of BIOT. Its native species consists of around 41 species of flowering plants, 4 ferns, and a variety of bryophytes, fungi and cyanobacteria. Some settled when spores and seeds were brought to the islands by sea, wind or attached to passing seabirds, while humans have introduced others – either deliberately or accidentally. As many as 280 species of plants and ferns can now be found on the islands. Some of these are invasive and have become a threat to the native ecosystem. Some native forests were felled to make way for coconut palms used for copra oil production. In the mid-1800s, so much copra oil was being produced for export that Chagos became known as the ‘Oil Islands’. Introduced rats remain the other big challenge, having significant negative impacts on the native flora and fauna, in particular birds.

The waters around Chagos are breeding and feeding grounds for marine life including:

It is a vital natural laboratory for scientists to learn how a healthy reef lives, and key to replenishing ecosystems in other threatened locations. The seas around the territory contain eight times more reef fish biomass than anywhere else in the Indian Ocean. Whilst some fish, such as the endemic Chagos clownfish, linger near the shores of the islands, there are some open-ocean fish such as large wrasse and grouper that cannot be found in other reefs in the region, as well as skipjack, yellowfin and bigeye tuna. In the past, as many as 25,000 tonnes of these species were caught by international fishing fleets as they passed through the islands’ waters, as well as 10,000 sharks caught each year as accidental bycatch around the archipelago. The establishment of the marine protected area has halted this, though threats from illegal and unregulated fishing remain. So methods such as satellite surveillance are being trialled. Protection of the seas around the Chagos Archipelago has provided a sanctuary where marine species can rebuild natural populations.

Climate change has had a major effect on coral reefs in the archipelago. Rising sea temperatures cause the corals to bleach as the symbiotic algae within the reef are sensitive to temperature, light exposure and acidity. Depleting algae and coral can result in a loss of vital habitats for a variety of marine species.

The Chagos Conservation Trust warns that illegal fishing in BIOT waters is having a significant impact on its marine biodiversity, particularly on top predators:

Indian Ocean shark numbers have decreased by 90% over the last three decades. Before the designation of the marine reserve, an estimated 10,000 sharks and 10,000 rays were killed annually by the licensed fishing industry. While protection has ended legal fishing within its waters, illegal fishing continues to affect sharks and other valuable species such as tuna and grouper.

On land, some plant species that were introduced to the islands are invasive and pose a threat to the native plants. Coconut was planted extensively for copra oil production, which meant that native forest was cleared.

Introduced rodents such as black rats had a strong influence on the survival rates of ground nesting birds and turtles as they were easy prey.  Some pilot work to remove these has begun. A terrestrial management plan is also being developed.

In 2017, the Bertarelli Foundation announced its new programme for marine science in BIOT. The programme builds on a series of expeditions, workshops and strategic plans to create a vision for the BIOT marine reserve as a global exemplar of science and conservation activities working to support effective management. From 2017 to 2021 the programme will be coordinated on behalf of the foundation by ZSL.

In 2015, UKOTCF, together with many partner organisations in the UKOTs, helped Stewart McPherson with his project Britain’s Treasure Islas. As part of this, we provided information and images for, and helped to fund, a series of mini documentaries on the premise that they would be open source so that everyone could enjoy them. BIOT’s mini documentary can be seen here (several other videos focusing on natural history are found below):