We give information about the Falkland Islands in two main ways. Although there is some overlap, they are largely complementary. The virtual tour (opens in a new window) uses a set of standard headings for each territory and, within these headings, presents what is essentially an illustrated slide-show, which can be viewed as a whole or by its sections. (If you have a slow internet connection, it may be easier to view the virtual tour.) The articles below are more variable in format and content, as indicated by the links.

The Falkland Islands are an archipelago formed from detached African continental crust in the South Atlantic Ocean joined as a projection of the Patagonian Shelf (51° 42’ S, 57° 51’ W), 483 km east of South America’s southern Patagonian coast and 1287 km north of the Antarctic Peninsula. The archipelago, with an area of ca. 12,100 km2, comprises East Falklands (where the islands’ capital, Stanley, is located), West Falkland and 776 smaller islands and stacks. 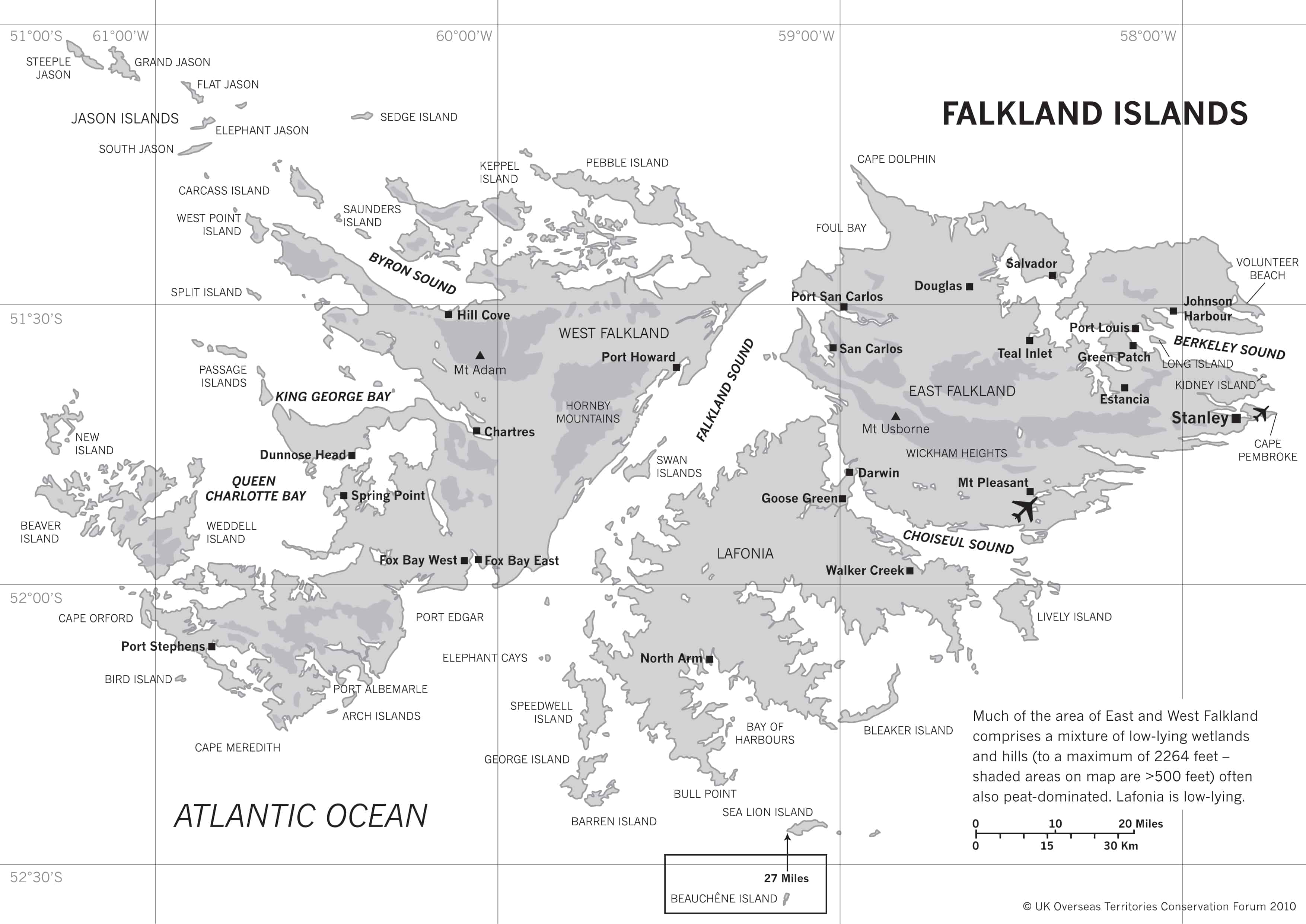 The Islands experience a cool temperate oceanic climate, characterised by a lack of extremes; temperatures are never high but are maintained at a moderate level, with a mean for January of 9.4 °C and a mean for July of 2.2 °C. Rainfall is low (450-600 mm/yr). The oceanic climate is dominated by westerly winds, as the islands sit in the ‘roaring forties’ belt of the South Atlantic. The average wind speed through the capital of Stanley is 31 km/h, but gales are frequent with winds reaching up to 95 km/h.

The topography of the Islands is generally hilly, with the highest point being Mt. Usborne on East Falkland, which stands at 705 m above sea level. Habitat types include: tussac, grassland, dwarf shrub heath fern beds, cushion heath, montant/feldmark, bog and flush, fen, marsh and swamp/marginal communities, open water, coastland, inland rock, scrub, woodland, and ‘other’. This broad classification of 14 officially recognised terrestrial habitats across the Falkland Islands is widely used to direct environmental and conservation work efforts in the islands.

The Falkland Islands are a biogeographical part of the mild Antarctic zone, with strong connections to the flora and fauna of Patagonia in mainland South America. There are over 2,800 native species recorded in the Falkland Islands, of which 30 have been confirmed as endemic species. The Falkland Islands now do not support any populations of native terrestrial mammals or reptiles.

The vascular flora of the Falklands has been well catalogued, with 350 plant species recorded growing in the wild; of these, 180 are considered native. Additionally, the Islands are currently known to have 14 endemic species, 5 of which are globally threatened according to IUCN in 2015. The islands are treeless and have a wind-resistant vegetation, predominantly composed of acid grasslands and a variety of dwarf shrubs.

Tussac is one of the most striking habitats to be found in the Falklands in coastal areas, and is formed from almost pure stands of Poa flabellate which attain heights of 2-3 m, with individual stocks of up to 1.5 m in diameter. This grass environment provides nesting sites for 30 species of birds and shelter for sea lions and elephant seals. There are 17 recognised Important Plant Areas (IPAs) for vascular plants. However, there are still areas of the archipelago where baseline surveys are required. The Falkland Islands have also an extensive lower plant flora with a diversity of mosses (235 species), liverworts (154 species) and lichens (455 species), of which at least 21 are known to be endemics. These non-flowering plants play an important role in the ecosystem services of the islands, including through soil/ peat formation and carbon storage.

Over 280 species of terrestrial invertebrates have been recorded from the Falkland Islands. However many of these are undescribed and the records are vastly incomplete. Approximately 125 of these are confirmed to be native to the islands and 14 have been recognised as endemic – a figure that is likely to rise once comprehensive baseline surveys have been conducted.

Over 220 species of birds have been recorded in the Falklands, of these, there are:

The Islands’ only native terrestrial mammal, the Falkland Island wolf (also known as the warrah) was hunted to extinction by European settlers in the late 1800s.

There are 24 marine mammal species that have been sighted in Falklands waters. These include the southern elephant seal, the southern sea lion, and sub-Antarctic fur seal, that breed across the archipelago. Additionally, multiple species of cetaceans, including orcas, sei whales and sperm whales have been recorded. The Falklands near-shore waters host a unique community of Commerson and Peales dolphins that exhibit a sympatric co-occurrence and apparent year-round reliance on coastal kelp forests. Marine flora around the Falklands has been well recorded, largely by the Shallow Marine Survey Group (SMSG), to a depth of 20m, with a total of 229 species recorded to date.

The Falkland Islands marine area (Exclusive Economic Zone – EEZ) is extensive and covers 463,897 km2, from shallow coastal waters to deep-sea of more than 4500 m. In the past, the waters were exploited for commercial whaling and sealing, and have now sustained commercial fisheries for several decades. Falkland Islands Government Fisheries Department has managed fisheries since 1987, and is considered to be a world leader in fin-fish and squid fishery science and management. The two species of squid that make up the main fisheries in the Falklands, the Illex argentines and Doryeuthis gahi, are extremely economically important. There are fisheries for 11 species of finfish, of which the main species are blue whiting, common hake, austral hake and hoki, but this is on a considerably smaller scale than the squid fishery. The Falklands marine environment is still a considerably untouched part of the world, including many areas that remain in close to pristine condition.

As with other islands, introduced invasive alien species pose a threat to the native biodiversity of the Falkland Islands. The total number of non-native species recorded during the RSPB’s South Atlantic Invasive Species project is 336, including 217 plants and fungi, 48 invertebrates and 17 vertebrates. The Falklands are one of the leading Overseas Territories in invasive vertebrate eradication. Rodent eradications from 66 islands have been attempted, principally by Falklands Conservation and Island LandCare from 2001, with high degrees of success, along with the removal of Patagonian foxes from two islands. Long-term monitoring is carried out to determine the success of these eradication attempts. The unsustainable management of sheep (introduced in the 1860s) is widely cited as a cause for the decline in many taxa in the Falklands. This is due to the over-stocking of sheep and loss/ degradation of important habitats caused by burning, erosion and re-seeding using introduced European forage species, competition from introduced grasses, and the application of fertilisers. Rotational grazing of livestock is promoted across the islands and has shown that native species have begun to return to areas where they have been absent for long periods of time.

Oil was discovered in the Falklands in 2010 during a first round of exploration that lasted until 2012, with a second round of exploration in 2015-16. With a recent decline in oil prices, this sector is volatile and revenue will vary annually. The developing oil industry is managed by the Falkland Islands Government and regulated to at least UK North Sea standards. Falkland Islands Offshore Hydrocarbons Environmental Forum (FIOHEF) was established in 2011 to provide a setting for debate and discussion on environmental issues relating to current and future hydrocarbon activities in the Falkland Islands. The group commissioned a project, carried out by scientists at the South Atlantic Environmental Research Institute (SAERI) and funded by Falkland Islands Government (FIG) and the Falkland Islands Petroleum Licensees Association, to examine the data gaps that need to be filled in order to better inform and monitor the potential impacts to the environment from the offshore hydrocarbon activities.

Sea Lion Island and Bertha’s Beach, East Falkland, are each Wetlands of International Importance under the 1971 Ramsar Convention on Wetlands, and a number of other proposed Ramsar Sites have been identified as qualifying.

In 2015, UKOTCF, together with many partner organisations in the UKOTs, helped Stewart McPherson with his project Britain’s Treasre Islands. As part of this, we provided information and images for, and helped to fund, a series of mini documentaries on the premise that they would be open source so that everyone could enjoy them.