We give information about the Pitcairn Islands in two main ways. Although there is some overlap, they are largely complementary. The virtual tour (opens in new window) uses a set of standard headings for each territory and, within these headings, presents what is essentially an illustrated slide-show, which can be viewed as a whole or by its sections. (If you have a slow internet connection, it may be easier to view the virtual tour.) The articles below are more variable in format and content, as indicated by the links.

The Pitcairn Islands are a group of four small, remote and varied South Pacific islands, comprising a total area of only 43 km2. They range from Pitcairn itself (4.5 km2), a geologically recent volcano, to Henderson Island, a 37 km2 raised coral atoll and the largest island, and low-lying coral atolls of Oeno (15 km2, maximum elevation of 1-2 m) and Ducie (6.4 km2, of which 0.74 km2 is emergent land raising 1-2m above sea level). The nearest continental land-masses are over 4,500km away, New Zealand to WSW and South America to the east. 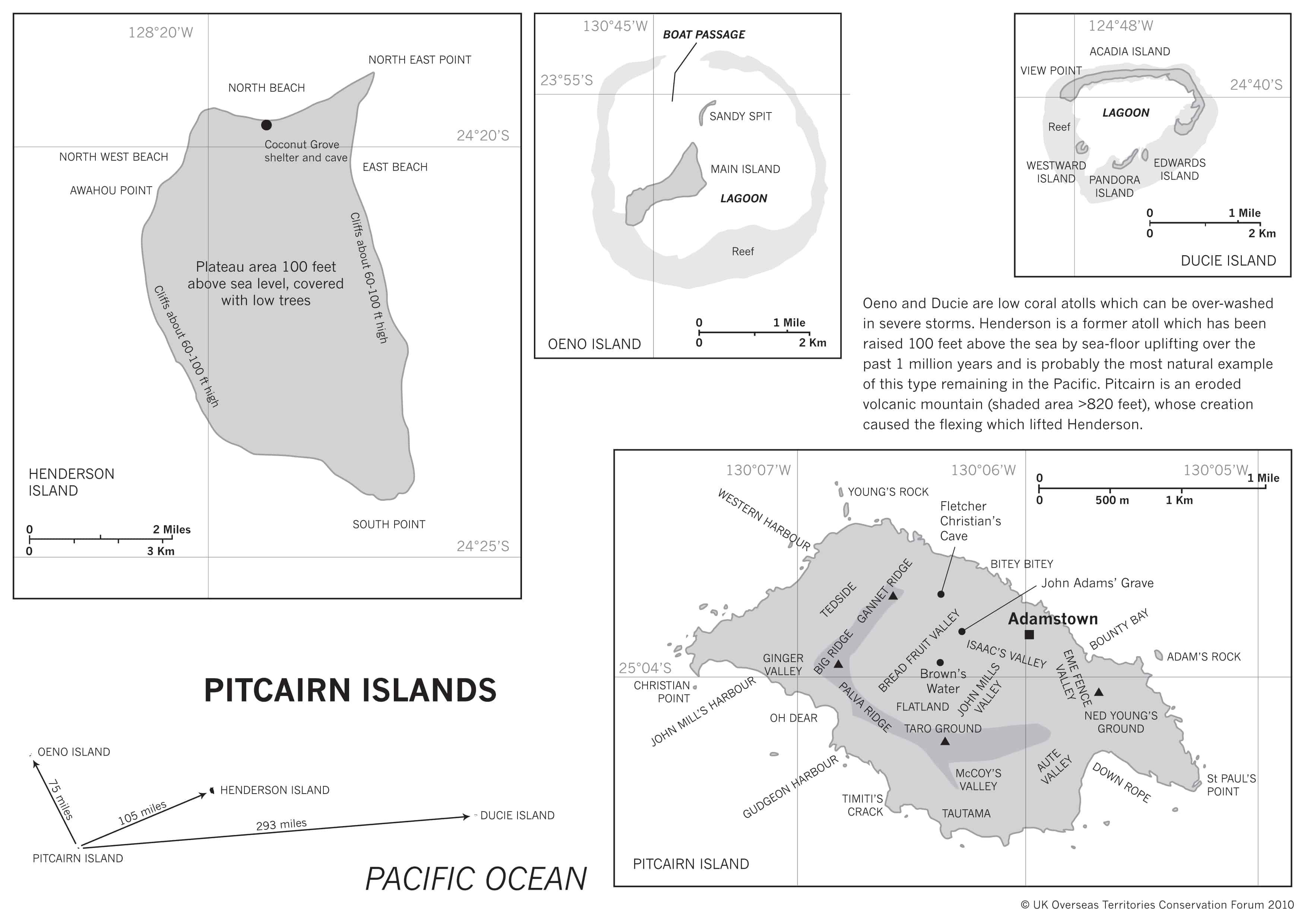 Only Pitcairn is inhabited, and well known for being the home of the descendants of the sailors who took part in the famous mutiny on HMS Bounty in 1789. The small community of less than 50 lives at Adamstown, isolated by more than a day’s ship or boat journey from its nearest neighbours in French Polynesia, around 500km NW. The volcanic island is relatively young, at 0.75 – 1 million years old, reaching a maximum altitude of 329 m with steep slopes and volcanic soils, varying from red to black in different locations. Henderson Island, the largest in the group, was designated a World Heritage Site by UNESCO in 1998. It is a raised atoll with no human inhabitants, and is one of the Pacific’s ecologically most intact islands remaining.

Tourism is the main economic driver on the island, along with subsistence agriculture and fishing, but many have jobs in government. Provisions, such as fruit and honey, are produced as a result of the rich volcanic soils, and are sold to visiting cruise ships, as well as – in the case of honey – sold to international customers as the purest honey in the world. The Governor of Pitcairn is the Wellington(NZ)-based British High Commissioner, and an appointed Governor’s Representative resides on the island for one-year secondments.

Fifty one of the native vascular plants are threatened; the endemic Coprosma benefica, known from only 11 individuals, and the endemic fern Angiopteris chauliodonta are restricted to small and fragmented populations. Due to the geological differences between the islands, plant species are not spread evenly between the islands.

Ducie is a low oceanic atoll the southernmost atoll in the world. It supports 3 native plant species. It has no endemic plants, due to the limited range of suitable habitats.

Oeno is a low oceanic atoll. The fringing reef is approximately circular and about 4 km in diameter. It supports 18 native plant species, none of them endemic.

The Pitcairn Islands (particularly Henderson, Ducie and Oeno) support large and globally important populations of sea-birds, including approximately 90% (200,000 breeding pairs) of the global population of Murphy’s petrel (nesting on Ducie). They also support Herald and Kermadec petrel populations and one of the largest colonies of Christmas shearwaters.

Pitcairn Island has a greater variety of ecological niches, and so plant species on the island are more diverse, with 81 native species, of which 9 are endemic. Two of these are now unfortunately extinct in the wild, including the national flower yellow fatu Abutilon pitcairnense rediscovered in 2003, but a recent landslide destroyed the last remaining plant. However, seeds have been banked in several collections in and outside of Pitcairn.

Henderson Island is one of the world’s best remaining examples of an elevated coral atoll ecosystem and remains little disturbed due to its remoteness and inhospitable nature. The island plateau is what was formerly the lagoon floor, lifted to an elevation of about 30 m by the Earth’s crust flexing when Pitcairn itself was formed. As a result, it is largely protected from the periodic inundation of the sea during cyclones, and so is cloaked in dense vegetation, growing on limestone soil and coral rubble. This has allowed the continued existence on the island of naturally colonizing species and, as a result, a diverse fauna and flora has developed with many endemic species.

Henderson has a high diversity of invertebrates, many of which are likely to be native/ endemic.

A small number of green turtles Chelonia mydas nest on the east beach of Henderson.

Studies on the marine environment in recent years have revealed incredibly healthy ecosystems. Over 350 species of fish have been recorded around Pitcairn, with several inshore fish known only from Pitcairn Islands.

The deep sea around Pitcairn contains approximately 400 sea-mounts which provide important habitat for many deep-sea fish and invertebrates. 22 species of cetaceans are found, including blue whale, sei whale, fin whales and humpback whales.

Several factors pose threats to the native vegetation, exacerbated by them being restricted to small areas of suitable habitats. This includes habitat loss caused by human activity and the significant threat from the spread of introduced species – there are approximately 250 species that have been introduced and compete with native habitats.

As with other remote islands in the region, Henderson’s unique biodiversity is threatened due to the presence of introduced Pacific rats that have a particularly devastating effect on the petrel chicks. It is believed that seabird numbers in general have dropped from an estimated 5 million pairs before rats arrived to just 40,000 pairs. In 2010, ground-breaking efforts were made to remove rats from Henderson (the largest tropical or sub-tropical island ever to be subject to a rat eradication operation), but unfortunately a weather change thwarted complete eradication. These efforts continue through the Henderson Island restoration programme. Pacific rats were removed successfully from Oeno and Ducie in the 1990s.

Recent studies have highlighted the impact of disposed plastics which are carried in ocean currents to the most remote islands. Henderson Island has been particularly plagued with some startling images comparing the coastal areas over 20 years apart.

2016 saw the legal designation of Pitcairn Island Marine Reserve which, at 834,000 km2, is one of the largest fully protected marine reserves in the world. Provisions were made for residents to continue artisanal fishing within 12 nm of the island’s coasts, but all commercial extractive activity is now prohibited. Innovative satellite technology is currently being used to monitor any suspicious fishing activity in the reserve.

In 2015, UKOTCF, together with many partner organisations in the UKOTs, helped Stewart McPherson with his project Britain’s Treasure Islands. As part of this, we provided information and images for, and helped to fund, a series of mini documentaries on the premise that they would be open source so that everyone could enjoy them. Pitcairn’s mini documentary can be seen here (as well as another video focusing on natural history):

An additional mini documentary can be seen here on Henderson Island.