We give information about South Georgia and the South Sandwich Islands in two main ways. Although there is some overlap, they are largely complementary. The virtual tour (opens in a new window) uses a set of standard headings for each territory and, within these headings, presents what is essentially an illustrated slide-show, which can be viewed as a whole or by its sections. (If you have a slow internet connection, it may be easier to view the virtual tour.) The articles below are more variable in format and content, as indicated by the links.

The main island of South Georgia is mountainous with many glaciers – permanent ice covers almost half of its total land-area of 3755km2. 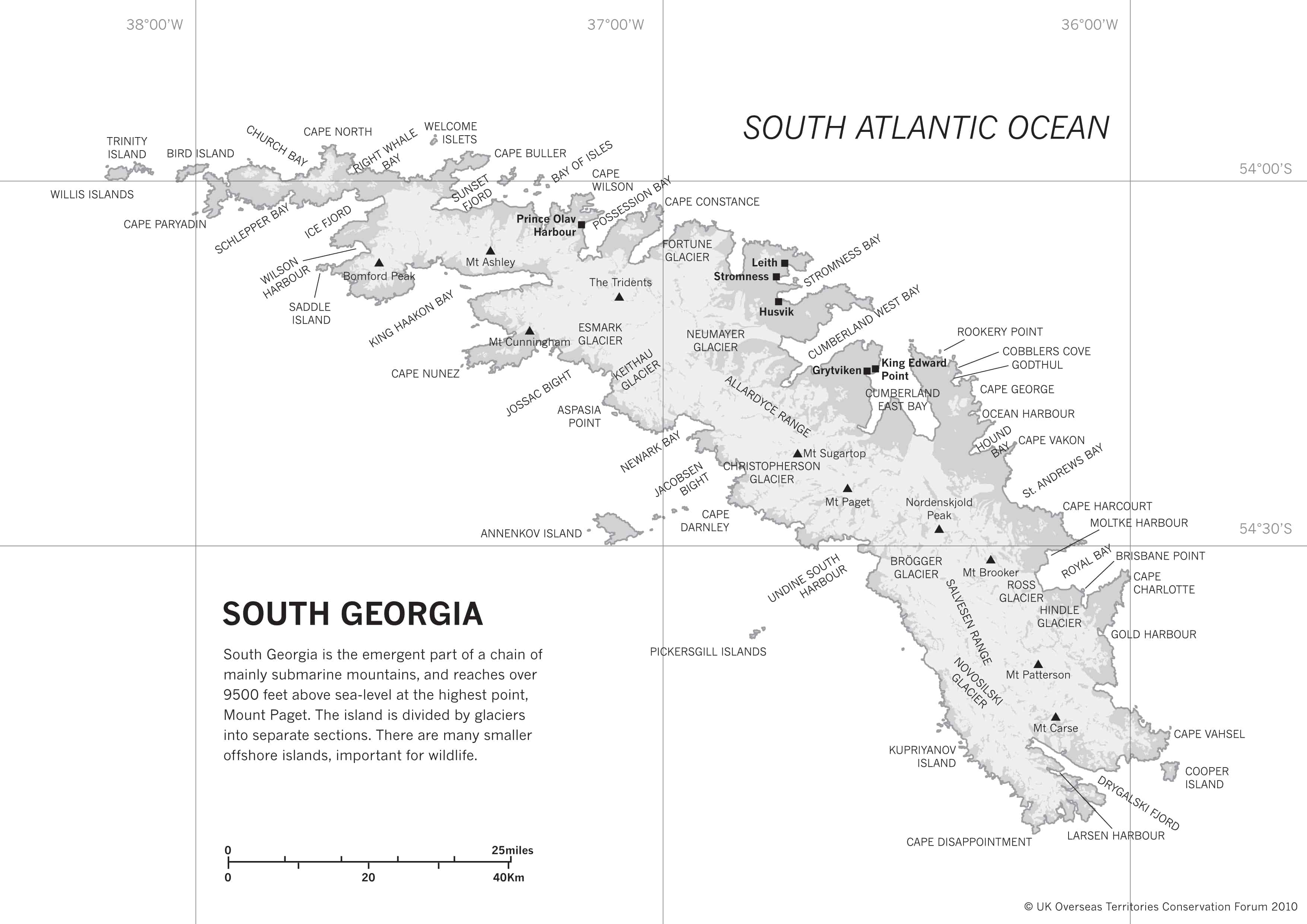 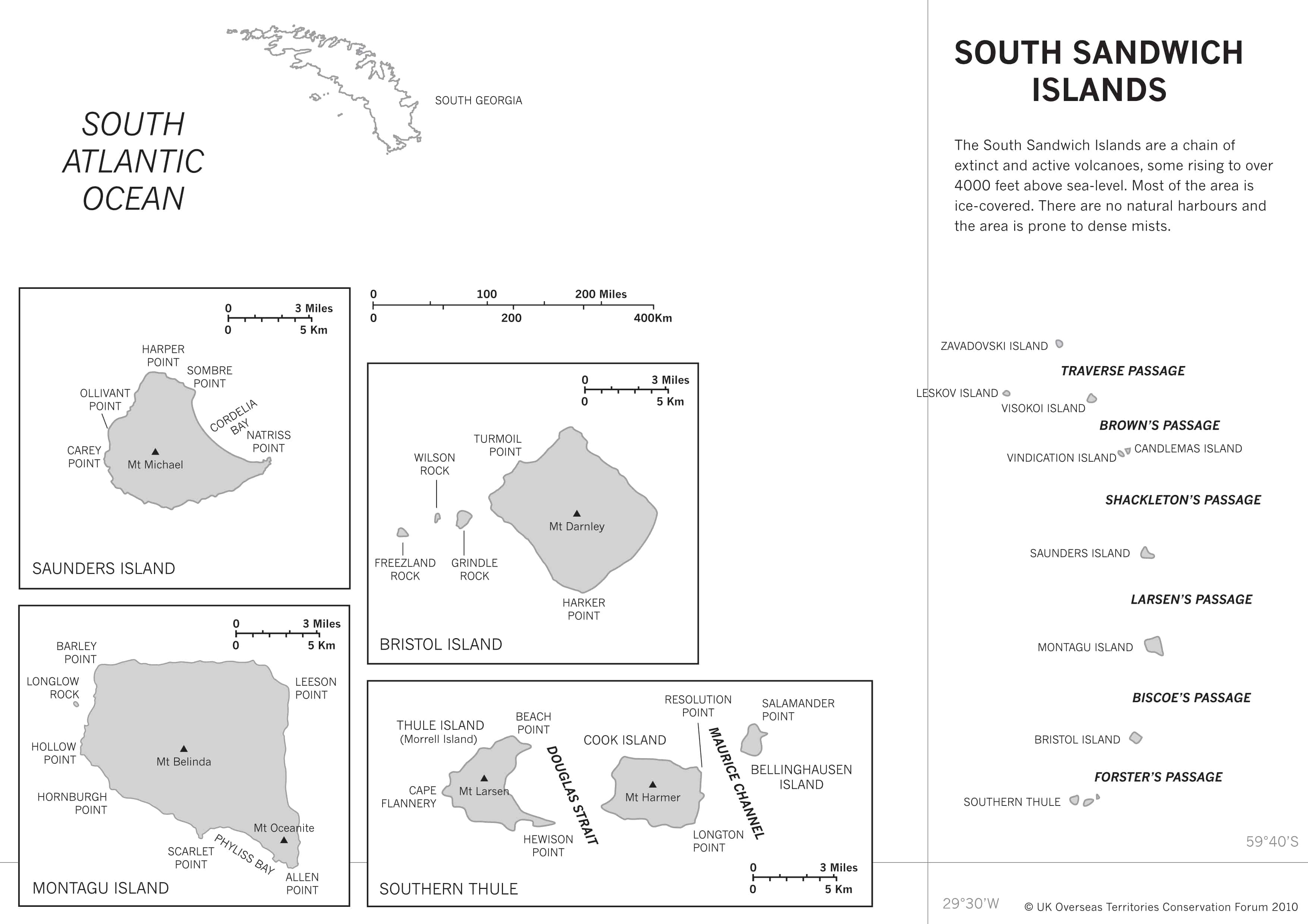 Historically, it was once the centre of modern whaling in the Southern Hemisphere (1904-1965), with over 176,000 whales (mainly fin, blue and humpback) killed in its coastal waters. South Georgia’s remote beaches are still littered with whale bones and the remains of whaling paraphernalia. Indeed, part of the old whaling station at Grytviken has been converted into the South Georgia Museum.

The island is now uninhabited except for officials and researchers, although some of its government workers are stationed in Stanley, Falkland Islands. The British Antarctic Survey undertake a diverse scientific research programme and staff two research stations year-round at Bird Island and King Edward Point.  South Georgia has one of the longest and most detailed scientific datasets in the Southern Ocean, with over 30 years of population data on seabirds and marine mammals at Bird Island.

South Georgia is surrounded by over 70 islands, islets, stacks and rocks. With a backbone of steeply uplifted mountain ranges (Allardyce and Salvesen Ranges) and at least 20 peaks over 2,000 m altitude (culminating at 2,965 m on the island’s summit, Mt Paget), South Georgia is the highest of all sub-Antarctic islands. Much of the land is over 1,000 m altitude and at least half is covered in permanent ice and snow. There are over 160 glaciers, many of which intersect a heavily indented coastline. Extensive ice-free peninsulas bounded by glaciers are typical of the north-east coast, where the permanent snow line starts at 400 – 600 m altitude. The south-west coast is predominantly rock and ice, with a narrow coastal fringe of mainly tussac grassland and permanent snow and ice.

At low altitude, mostly in the coastal lowlands up to around 200m altitude, there is a sparse covering of herbaceous vegetation, predominately in different grassland communities and in mire and bog, mossbank and fellfield. There are 25 species of vascular plants (18 flowering plants, 6 ferns, 1 clubmoss) native to South Georgia, largely co-existing with over 50 introduced vascular species, which mostly occur around the old whaling stations. There are about 125 species of native mosses, 85 of liverworts and 200 of lichens. Woody species are unable to withstand the island’s severe weather conditions.

South Georgia has huge seabird colonies, several endemic birds, many native plants and a rich marine ecosystem, which is recognised globally as a biodiversity hotspot.

This wealth of biodiversity includes:

Recent work by the British Antarctic Survey to pull together all the research on biodiversity in South Georgia has resulted in the South Georgia Marine Biodiversity Database (SGMarBase) and data gathered has found over 1,445 species occur in the South Georgian shelf alone. The Shallow Marine Survey Group survey in 2010 found some interesting results which have contributed to this work and a greater understanding of the biodiversity found in the marine environment.

The effects of climate change are being monitored, with studies estimating that 97% of South Georgia’s glaciers have retreated in the past 50 years. This has opened up areas, which would once has been ice, which can now be colonised by non-native/invasive species.

There is pressure from the commercial fishing industry as they search for new and rich fishing areas to meet demand for food worldwide.

The Government of South Georgia & the South Sandwich Islands (GSGSSI) and UK-based South Georgia Heritage Trust, in collaboration with many partners, are tackling some of these major challenges as outlined below.

In 2012, the Government of SGSSI created one of the world’s largest, sustainably managed Marine Protected Areas (MPA) that encompasses the entire SGSSI Maritime Zone north of 60 °S. It has been designed with the aim of ensuring the protection and conservation of the regions’ rich and diverse marine life, while permitting sustainable and carefully regulated fisheries. This includes a ban on all bottom-trawling and bottom-fishing at certain depths, resulting in 92% of the seafloor being protected from fishing activity. There are also a series of no-take zones around the islands, and the closure of the krill fishery November to March, when krill-eating birds and marine mammals are breeding.

GSGSSI will extend the current Marine Protected Area legislation across its entire 1.24m km2 Maritime Zone. No-take zones (NTZ), which will be closed to all commercial fishing activity, will be expanded to cover 23% (284,000 km2) of the MPA; an area which greatly exceeds the size of the UK. This new NTZ network covers key biodiversity hotspots at the South Sandwich Islands and protects the globally significant and unique South Sandwich trench. In addition, a precautionary two-month extension to the seasonal closure of the highly regulated fishery for Antarctic krill will limit fishing to the winter period between May and September; this is to reduce potential competition between the fishery and krill predators such as seals and penguins during their breeding seasons.

To further reduce potential human impacts upon the region’s ecosystem, GSGSSI will introduce a ban on the carriage and use of heavy fuel oil (HFO) by vessels operating around the South Sandwich Islands. This will mirror the prohibition already enshrined in international law for vessels operating south of 60 degrees South. The use and carriage of HFO will be phased out completely across the entire SGSSI Maritime Zone by December 2020. GSGSSI will also enshrine in legislation the prohibition on the commercial extraction of mineral resources, whilst allowing for scientific research and related activities; also modelled on international law.

This enhanced protection adds to the comprehensive array of measures currently in place, including the total ban on all fishing using bottom trawls across all 1.24 million km2, the prohibition of all bottom-fishing activities at depths shallower than 700m and greater than 2250m and an extensive network of benthic closed areas designed to protect vulnerable habitats and species.

The largest rat removal ever attempted

Rodents, inadvertently brought to the island by sealers and whalers from the late 1700s onwards, as well as reindeer, which were deliberately introduced in the early 1900s, have had a significant impact on the island’s ecosystem, in particular on ground-nesting birds and the vegetation. In 2010, conservationists, led by the South Georgia Heritage Trust, commenced a seven-year project (the world’s largest) to eradicate rats, by spreading a rodenticide in pellets by helicopter. To enable more effective restoration of habitat, non-native reindeer were also removed with the help of marksmen from the Norwegian conservation authority, in a project of the Government of SGSSI following wide consultation. In 2015, a nest of the endemic pipit, was sighted in an area where rats had been removed and, even earlier, pintails were seen successfully rearing young, previously almost unknown in rodent-infested areas. There are also control programmes in place to manage or eradicate a number of the introduced plants. The Government of SGSSI now manages South Georgia with strict biosecurity protocols and monitoring of visitors.

The National Biodiversity Action Plan for SGSSI 2016-2020 can be viewed here.

In contrast to South Georgia, the South Sandwich Islands are rarely visited, and information on the terrestrial and marine flora and fauna is sparse. The archipelago is the only arc of active volcanoes in the Southern Ocean and its waters probably contain unique deep-sea hydrothermal vent ecosystems and seamounts. As part of the MPA, there have been calls to reclassify the waters around the South Sandwich Islands as a fully-protected marine sanctuary as the marine area is near-pristine with only limited commercial fishing effort. The biggest threats to these islands are considered to be largely natural, arising from climate change (noting that this is almost certainly human-induced), volcanic eruption and ice scour on the sea bed.

In 2015, UKOTCF, together with many partner organisations in the UKOTs, helped Stewart McPherson with his project Britain’s Treasure Islands. As part of this, we provided information and images for, and helped to fund, a series of mini documentaries on the premise that they would be open source so that everyone could enjoy them.