We give information about St Helena in two main ways. Although there is some overlap, they are largely complementary. The virtual tour (opens in a new window) uses a set of standard headings for each territory and, within these headings, presents what is essentially an illustrated slide-show, which can be viewed as a whole or by its sections. (If you have a slow internet connection, it may be easier to view the virtual tour.) The articles below are more variable in format and content, as indicated by the links.

St Helena Island, situated in the South Atlantic (15°56’S 5°43’W), is one of the remotest settled islands in the world. A 122 km2 island, its nearest land is Ascension Island 1125km to the North-West. It is 1950 km from the south-west coast of Africa and 2900 km from the coast of South America. There are several small islets and rock stacks off the coast of the main island of St Helena, all of which are within one kilometre (0.6 miles) of the shore. 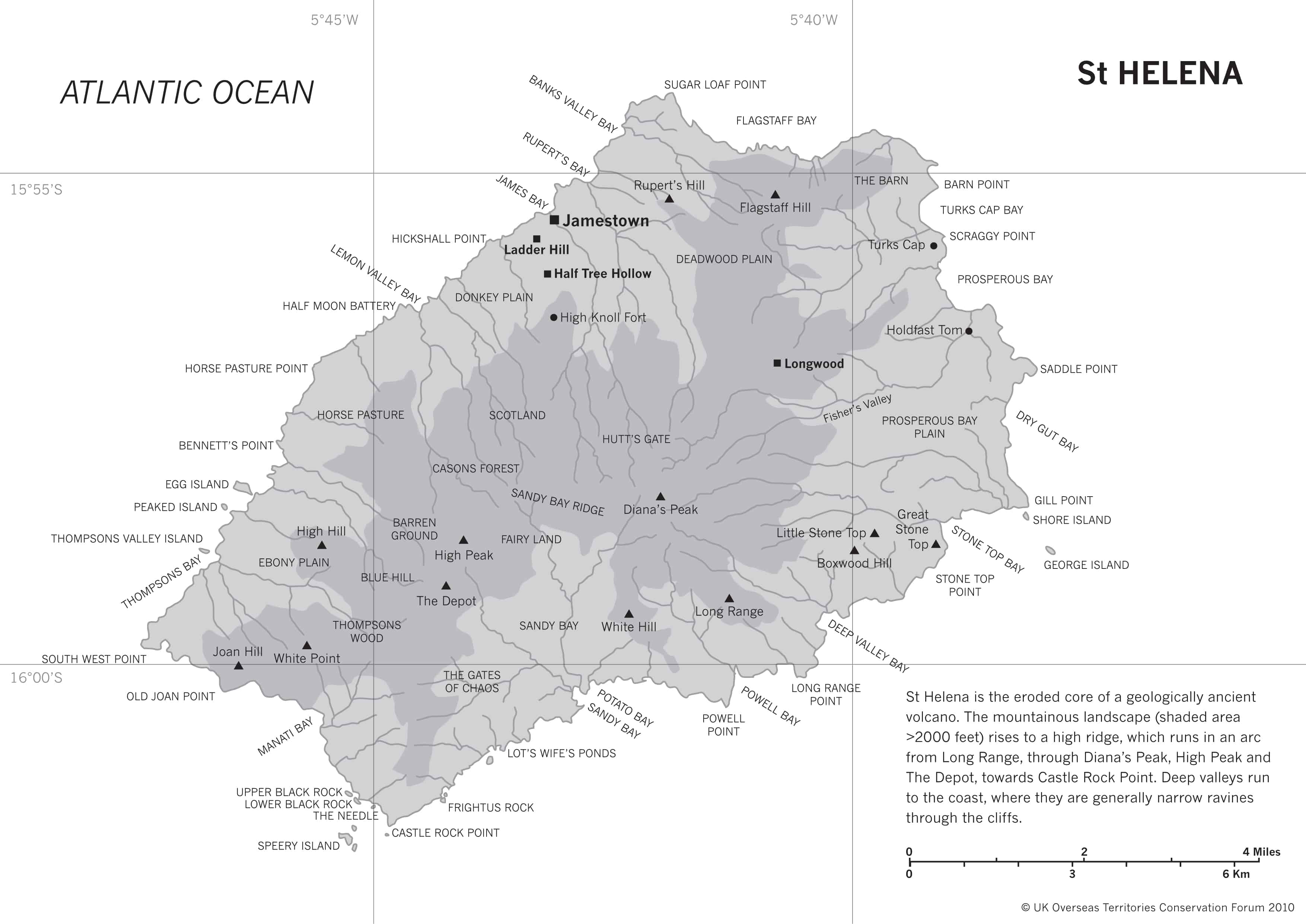 The island is home to a human population of 4,534 (2016) and, due to the difficulty in accessing the island since the era of ship-board travel, there was a heavy reliance on financial aid from the British and EU Governments. However, the construction of the first airport, opened in 2017, is anticipated to open up the island to economic development.

The Island is sub-tropical, maritime and mild, moderated by the Benguela Current which flows past northwards. In the north of the island in Jamestown, temperatures range 20-28°C in the warmer months (January – March) and 17-24°C for the rest of the year, but in the central parts of the island it can be 5-6°C colder. Almost continuous south-easterly trade winds, at 16-32km/h, lower the temperature and make the weather patterns highly changeable. Rainfall is often extremely localised, with low annual rainfall in Jamestown (152mm) but higher at the Peaks, where cloud and mist accumulation bring 290 days of overcast conditions, and along the south coast, with around 750-1000mm falling per year. Humidity is relatively constant in the mid-60s in the warmer months and low-mid-70s for the rest of the year.

The flora of St Helena is particularly distinctive, with circa 420 plant species present in the wild, of which 45 are endemic and a further 15-20 are also native to the island.

The rest (350 spp., 85% of the total) are introduced species that have become naturalised. At least 8 endemic species are now thought to be extinct and all of the endemic species on the island are scarce and likely to be Critically Endangered. Additionally, there are approximately 26 endemic bryophytes. The most recent survey conducted in 2006 counted 225 lichens, 8 of which were found to be new to science. St Helena is considered a global hotspot for invertebrate diversity, supporting around 460 invertebrate species found nowhere else on earth (the highest number of endemic invertebrates of all the UKOTs).

Previous
Next
St Helena’s flagship endemic invertebrate, the Spiky Yellow Woodlouse, is one of the rarest invertebrates in the world. This Critically Endangered species can reach 1cm body length and has a distinctive yellow colouration. Nine species of seabird are recorded breeding on St Helena’s mainland and offshore islands: sooty tern, white (locally referred to as fairy) tern, red-billed tropicbird, brown noddy, black noddy, brown booby, masked booby and Madeiran storm petrel. The St Helena plover, locally known as the wirebird due to its thin legs, is the only extant vertebrate endemic to the Island. Up until recently, the wirebird was classed as Critically Endangered but recent surveys have shown a stable or increasing population, with 559 mature individual recorded in 2016.

St Helena’s marine environment supports a diverse array of marine life, including many endemics. The surrounding ocean is important also for several charismatic migratory species, including humpback whales, whale sharks and turtles, as well as resident populations of dolphins. In late 2016, the 200 nautical mile Exclusive Economic Zone surrounding St Helena was designated as a Category VI (Sustainable Use) Marine Protected Area, meaning that marine activities and resource collection are allowed but managed in a manner that incorporates cultural values and sustainability.

As is common with islands, much of the endemic flora and fauna is highly threatened, due to fragmentation and loss of their specialist habitat, competition, and/or predation from invasive species. A large amount of habitat destruction has occurred on St Helena over the years, especially to the forests which clothed much of the inner zone and which were cut for timber and firewood. Fragments of cloud forest are now confined only to High Peak and the Diana’s Peak range, but these have been substantially degraded following invasion by numerous non-native plant species. Large areas of relict moist forest were also cleared to make way for plantations of New Zealand flax. Following the loss (due to the opening of the Suez Canal) of St Helena’s early purpose as the main staging point for ships on the lucrative trade from eastern Asia, in the early 20th century, the flax industry sustained the island’s economy for over 50 years by providing material for British Post Office bags until the market for natural fibre products declined in the 1960s.

St Helena’s recently-constructed airport is located within Prosperous Bay Plain in the east of the island, the flattest area on St Helena. Prosperous Bay Plain contains a unique desert ecosystem in its Central Basin and surrounding ridges and valleys and is an area with a number of endemic invertebrates (an estimated 14% of the island’s total), as well as being an important wirebird nesting site. Local conservationists and UKOTCF agreed not to oppose this, because of the need to manage the island, the requirement of a local economy to sustain this, and the advice that the airport was, in turn, a requirement – and provided that the airport’s “foot-print” was minimised.

As part of its commitment to conserving the environment, the St Helena Government created an Environmental Management Directorate (EMD) in 2012. The EMD focuses on policy and legislation, communication and stakeholder engagement, evidence-based advice, assessment, monitoring, evaluation and enforcement. The National Environmental Management Plan was developed in 2012, and built on commitments and previous work carried out as part of the Environment Charter, signed in 2001 and guided by a Strategy for Action developed by UKOTCF in partnership with on-island organisations 2004-2006. St Helena National Trust (SHNT) has been active since 2002, when several existing local bodies grouped together to form it, with assistance from UKOTCF. The Trust’s activities include restoring the Island’s fragile ecosystems, learning about and conserving the Island’s many unique species, and working on and promoting the protection of the many historic buildings and fortifications.

When the Island was first colonised, there were reports of a large expanse of forest called the Great Wood, home to an unknown number of birds, insects and plants that are now extinct. The Great Wood was entirely destroyed as settlers cut down the trees for firewood, used the bark for tanning, and allowed introduced mammals such as goats to graze on the saplings. The site of the Great Wood became semi-desert. The Millennium Forest Project was launched in 2000 with tremendous energy from the Island community, in a bid to reforest some of the area previously occupied by the Great Wood. Over 250 hectares of land were set aside for reforestation and, since 2002, over 10,000 native gumwood trees have been planted. The St Helena National Trust continues to manage and work to improve the ecological diversification of the forest and maintain it as an educational and tourist attraction.

St Helena has designated 23 National Conservation Areas (NCAs) under the Land Development Control Plan. The NCAs are split into four types: National Parks (3), Nature Reserves (6), Important Wirebird Areas (5) and Historic Conservation Areas (9), with some management plans completed and others in development. Diana’s Peak National Park was the first designated in 1996, encompassing the area of the 3 highest peaks on the island: Diana’s Peak (823 m), Cuckold Point and Mount Actaeon. Several sites have been identified as proposed Wetlands of International Importance under the Ramsar Convention. The whole island is also on UK’s Tentative List of potential nominees for World Heritage Site listing.

The cloud forest of the Peaks National Park is the only remaining densely vegetated habitat type on St Helena that can still be considered predominantly native. The black cabbage trees M. integrifolium act as a keystone species in this ecosystem, with their presence facilitating the necessary conditions for the endemic Endangered St Helena dogwood and the endemic Endangered whitewood to germinate. The Peaks are a very important area for endemic flora and invertebrates, with a number of completed and on-going projects to conserve these species, clear or control invasive plants, and maintain access for public awareness and enjoyment but with minimised disturbance to the fragile environment (EU BEST project 2016). They also constitute one of the proposed Ramsar Sites.

Voted as one of Lonely Planet’s ‘Top Ten Best Travel’ for 2016, St Helena is set to become a favoured ‘off the beaten track’ destination. With the recent development and opening of an airport, the decrease in travel time, from a 5-day voyage on the Royal Mail Ship St Helena to a 5-hour flight makes the island more accessible to the world.

Some early conservation efforts for St Helena were coordinated from the late 1980s by UKOTCF’s St Helena Working Group, whose remit was later widened to become the South Atlantic Working Group and now the Southern Oceans Working Group. In the early 2000s, UKOTCF facilitated several local groups to come together to form the St Helena National Trust.

St Helena possesses physical remains from a unique and varied built heritage. This includes: military defences and communication networks from the 17th century to the present; plantation houses and their estates; Napoleon’s residences; Georgian colonial architecture; a complete East India Company trading landscape; a distinctive vernacular building style that prevails across the whole island. The recent Rupert’s Valley Liberated Africans’ cemetery excavations have demonstrated the value of St Helena’s buried archaeological resource and, across the island, other remains await discovery and exploration. Charles Darwin visited St Helena on board the HMS Beagle, arriving on the 8 July 1836 and remaining on the island for 5 days. Darwin described the island as a desolate place and spent much of his time exploring the geology with the aid of an elderly local guide.

2015, UKOTCF, together with many partner organisations in the UKOTs, helped Stewart McPherson with his project Britain’s Trasure Islands. As part of this, we provided information and images for, and helped to fund, a series of mini documentaries on the basis that they would be open source so that everyone could enjoy them.