The Tristan da Cunha archipelago (37°08’ S, 12°28’ W) comprises six islands lying 1,900km south-south-west of Saint Helena. Tristan Island, with an area of 96 km2, is the only inhabited island of the archipelago, with a population of 293 people (2016); the human population has never exceeded 300 throughout the 200 years of occupation. It was first permanently settled in 1810, with the capital and only settlement, Edinburgh of the Seven Seas, located in the north-west of the island. Most of the 40 km of coastline is very steep, comprising of cliffs rising to 600m in places. At 2,062m, Queen Mary’s Peak, the summit of the shield volcano that forms Tristan Island, is the highest point in the Tristan da Cunha archipelago. Within 40 km south-west of Tristan Island lie Inaccessible Island (14 km2, up to 600m high) and the Nightingale Island group comprising Nightingale Island (3.4 km2, up to 400m high) and Middle and Stolenhoff islands (both < 1 km2). Gough Island is a further 350 km south-east of Tristan Island, with an area of 65 km2 and height of 910m, consisting of a main island and several islets and rocks. The Exclusive Economic Zone (EEZ) attributed to the Tristan archipelago extends to around Gough Island, making it the second largest in the South Atlantic, at 754,720 km2 in area. 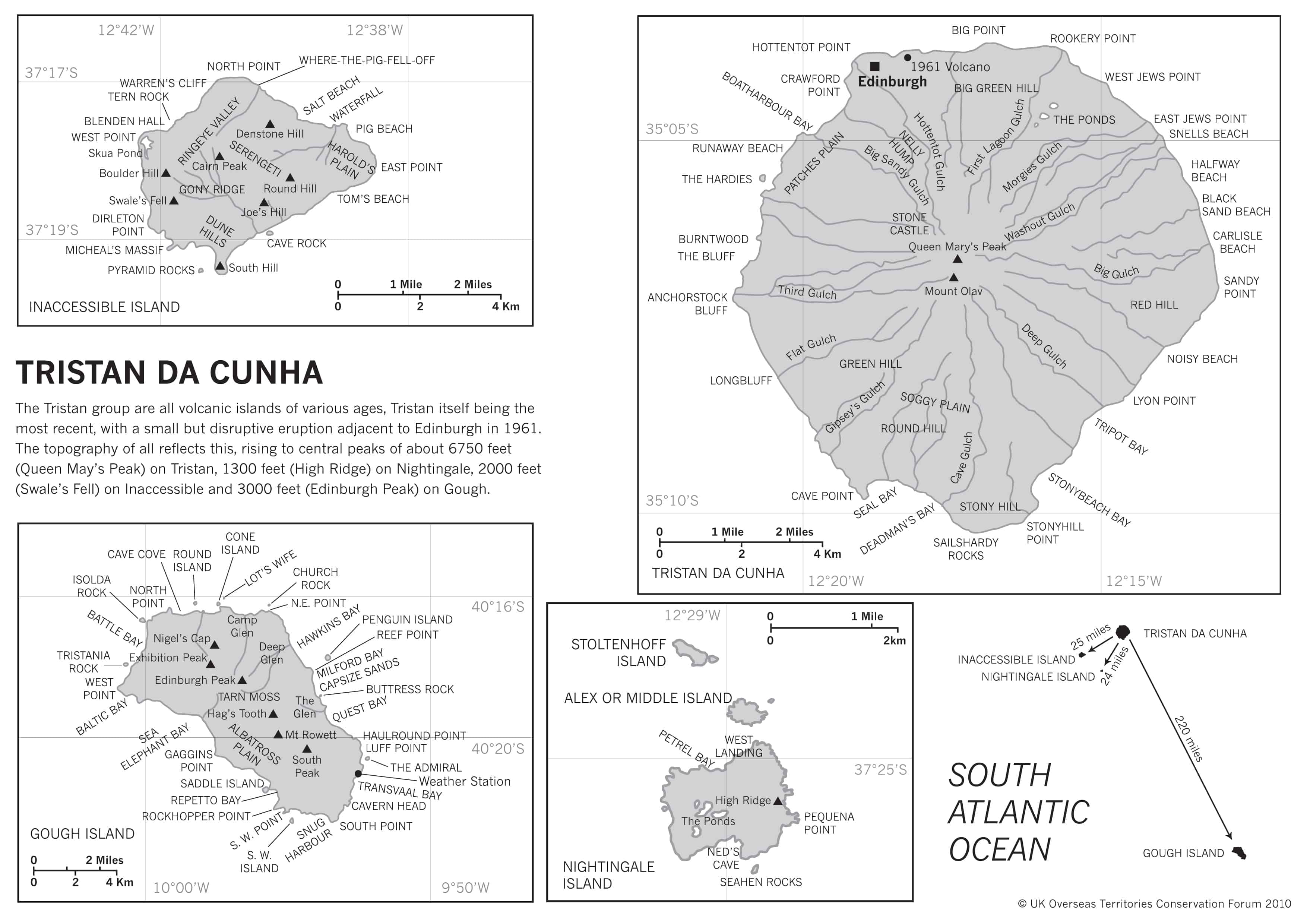 The economy is almost completely reliant on a sustainable commercial fishery of Tristan rock lobster Jasus tristani. To protect the lobster stock there are strict restrictions on total allowable commercial catch for each individual island, the type of fishing gear, and minimum size. It meets the standards as set by the Marine Stewardship Council and, as it is frozen shortly after catch, it can be sold as far away as Japan.

Over 40% of Tristan’s territory is a declared nature reserve, and Gough and Inaccessible Islands comprise a World Heritage Site, as well as Wetlands of International Importance under the Ramsar Convention.

The islands of Tristan, Nightingale and Inaccessible have a mild-temperate, oceanic climate, tempered by trade winds. The islands sit near the belt of the ‘roaring forties’, strong westerly winds found between 40-50 S which causes the weather to be highly changeable. Temperatures rarely reach more than 24 C during the summer months, but they remain in the mid-teens for the majority of the year, with very little seasonal variation. Also, due to the step change in elevation across the main island of Tristan, which is only 11km in diameter but reaches 2,062m in height, the rainfall is also highly variable. There is a high annual rainfall of around 1,681mm recorded around the north coast. This high rainfall generates an average humidity of 78%.

Ecosystem types are zoned across the islands in relation to elevation, with four main biomes and at least four different types of ecosystems on the main island of Tristan. Despite having a very similar eco-type across all the islands in the Tristan archipelago, differences in elevation and, in the case of Gough, latitude, produce altered climatic effects and consequently changes in flora assemblages. There are no native reptiles, amphibians or freshwater fish on any of the islands. All shallow marine habitats around Tristan are very wave-exposed with small tidal range. Occurring 350km to the south-south-east of the main island of Tristan, Gough Island’s climatic difference has resulted in distinct species assemblages to the rest of the archipelago.

The vascular flora of the island group are reasonably well known. However, there is still much information lacking about the abundance and distribution of species. A total of 58 species of flowering plants are native to the islands, with a further 34 confirmed as endemic. There are 21 endemic fern and clubmoss species, with another 35 native species and a further 59 endemic species of moss among 126 recorded.

The Tristan island group is a globally important area for birds, home to 86 native species (18 breeding) and 11 endemic species, some of which are found only on one or two of the four islands, including the Tristan thrush, the rare Inaccessible rail, the smallest flightless bird in the world, and the rarest “British” bird, the Wilkins’ bunting. Of these 11 species, all are ranked as threatened on the IUCN Red List. This has led to two Endemic Bird Areas (EBAs) being recognised by BirdLife International: the Tristan Islands Endemic Bird Area (including Tristan, Nightingale and Inaccessible islands) and Gough Island Endemic Bird Area. Each of the four islands is also an Important Bird Area (IBA) in its own right, supporting millions of seabirds, such as the Vulnerable spectacled petrel, yellow-nosed albatross, the Endangered Tristan albatross, the Vulnerable Atlantic petrel and greater shearwater.

Known by Tristan Islanders as Pinnamins, Northern Rockhopper Penguins breed in rookeries throughout the Tristan archipelago. In fact 99% of the population breeds here. Rockhoppers are recognisable by the yellow tassels on the sides of their heads and their hopping gait when they move on shore. They are so characteristic of the islands that the islanders sometimes call themselves ‘rockhoppers’.

The islands support also breeding populations of fur seals and elephants seals, now recovering from the hunting of the 19th century. Many cetacean species are found in the offshore waters, including southern right whales, sperm whales, humpback whales, long-finned pilot whales and Shepard’s beaked whale, as well as several species of dolphins.

One of the greatest threat to the wildlife of Tristan da Cunha is from the introduction of alien species, both plant and animal. The development of agriculture on Tristan has led to significant changes to areas of natural habitat of the main island, including the loss of coastal tussock grass. The spread of alien species is exacerbated by the presence of grazing animals. The most significant introductions in the terrestrial environment have been the arrival of rats on Tristan and house mice on Gough, which have severely depleted burrowing petrel populations on Tristan, and continue to threaten the survival of several seabird and landbird populations, on both islands. Fortunately, the two other islands (Nightingale and Inaccessible) remain rodent-free and it is vital that they remain so.

The Tristan Group is near the ship route from South America to Asia, and has suffered twice in recent years from poor navigation leading to wrecks of modern major vessels, leading to impacts of both invasive species and pollution threatening wildlife and the economically vital fishery.

Although facilities for processing fishing catch are to a very high standard, an inadequate harbour means that local fishermen can only use inshore vessels. This limits their ability to exploit their fishery as well as tourism as it makes it difficult for them to land during cruises across the Southern Oceans.

Gough Island, described as a ‘strong contender for the title most important seabird colony in the world’, currently faces a major threat in the form of introduced rodents that depredate seabird chicks and eggs. Mice were accidentally introduced to the island by sailors during the 19th century and have evolved to become two or three times larger than ‘normal’ by exploiting all of the food sources on the island. Remote cameras have revealed how the mice eat the flesh of live seabird chicks and the open wounds regularly lead to the deaths of these (short film by Stewart McPherson). The Gough Island Restoration Programme developed by the RSPB and Tristan da Cunha Island Council and begun in 2017, aims to restore the island to its natural state, with a focus on eradicating the mice to prevent extinctions.

The Tristan da Cunha Government Conservation Department leads on protection and conservation of its globally important wildlife. It works with many partners to achieve this.

The Biodiversity Action Plan 2012-16 was produced by the RSPB and Tristan Government with the vision to enable the people of Tristan da Cunha, in partnership with organisations from around the world and particularly in the UK and South Africa (including FitzPatrick Institute of African Ornithology), to conserve their globally important and unique biodiversity for the benefit of current and future generations.

As part of the UK Government’s Blue Belt programme, the Marine Management Organisation and the Centre for Environment, Fisheries and Aquacultural Science are working in partnership with the Tristan da Cunha Overseas Territory to ensure their waters are effectively protected, managed and monitored. This includes a focus on tackling Illegal, Unregulated and Unreported fishing (IUU), compulsory reporting for hazardous cargo, and maintaining the MSC-certified Tristan lobster and bluenose warehou fisheries to ensure that they are truly sustainable in the long-term.

The Natural History of Tristan da Cunha: This 44-page photographically illustrated book, by Paul Tyler and Alison Rothwell, was produced by UKOTCF to make the scientific results of a Darwin Initiative project on biodiversity conservation in Tristan available for use by the island’s school, to which a large stock was supplied free of charge. However, it will be of use too for a wider readership.

A virtual tour for Tristan da Cunha islands, outlining their historical and cultural importance is currently under development and will shortly be available here.

In 2015, UKOTCF, together with many partner organisations in the UKOTs, helped Stewart McPherson with his project Britain’s Treasure Islands. As part of this, we provided information and images for, and helped to fund, a series of mini documentaries on the premise that they would be open source so that everyone could enjoy them. Tristan’s mini documentary can be seen here (several other videos focusing on natural history are found below):