We give information about the Cayman Islands in two main ways. Although there is some overlap, they are largely complementary. The virtual tour (opens in a new window)  uses a set of standard headings for each territory and, within these headings, presents what is essentially an illustrated slide-show, which can be viewed as a whole or by its sections. (If you have a slow internet connection, it may be easier to view the virtual tour.) The articles below are more variable in format and content, as indicated by the links

The three low-lying Cayman Islands are strung along a submarine mountain ridge south of Cuba, west of Jamaica (19°20′N 81°13′W). The total land area is 260km2, surrounded by the Caribbean Sea. 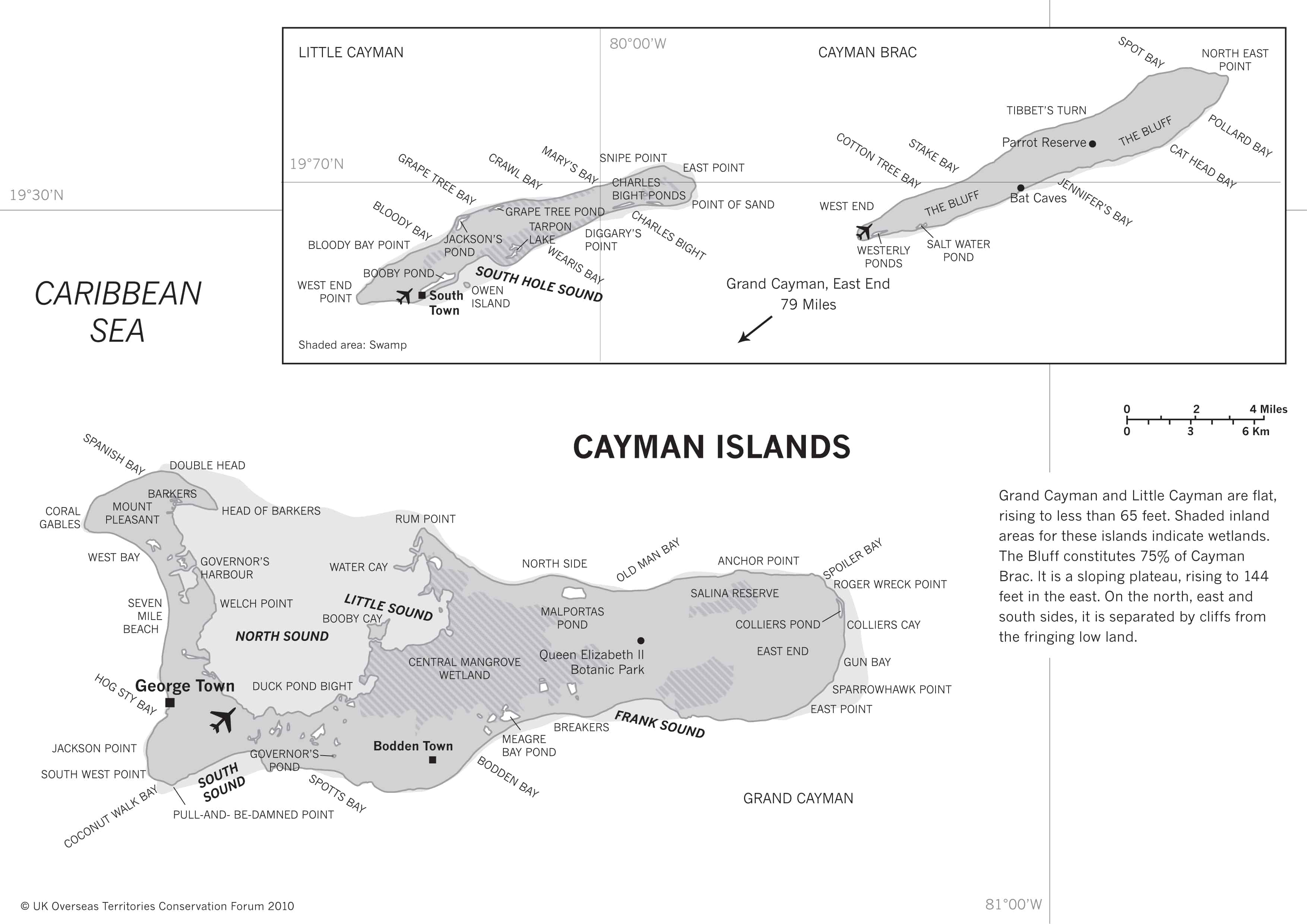 In 1503, Christopher Columbus passing by the islands noted the great abundance of giant green turtles – as well as the long-extirpated caymans which gave the islands their name. The Islands appeared to be uninhabited. For the next 200 years, ships for revictualling (acquisition of fresh provisions) visited them and small groups of pirates and shipwrecked sailors formed temporary settlements. No country attempted to colonise the islands before 1670, when Spain ceded the Cayman Islands and Jamaica to Britain by the Treaty of Madrid. After 1863, the Caymans formally became a dependency of Jamaica and the legislature of Jamaica had the final say over the locally passed laws of the islands. Cayman Brac and Little Cayman were not settled until 1833, and it was not until 1887 that a formal administrative connection between them and Grand Cayman was achieved. In 1959, the islands ceased to be a dependency of Jamaica and became a unit territory within the Federation of the West Indies. When the Federation was dissolved, in 1962, the Cayman Islands chose to remain under the British Crown, and thereupon received a revised constitution, which in 1972 was modified to allow for directly responsible government. This was further modified in March 1994.

In 2009, a new Constitution, including a Bill of Rights, was ordained. A 19-seat (not including two non-voting members appointed by the Governor which brings the total to 21 members) Legislative Assembly is elected every four years. Of the elected Members of the Legislative Assembly (MLAs), seven are chosen to serve as government Ministers in a Cabinet along with two official members headed by the Governor. One Cabinet member is designated Premier.

The Cayman Islands are clothed in subtropical dry forests and mangrove wetlands, supporting diverse life typical of the Greater Antillean region. Offshore reefs and a mangrove fringe surround most of the islands’ coasts. The Cayman Trench is the deepest part of the Caribbean at a depth of over four miles. This separates the islands from Jamaica.

In the terrestrial environment, protected areas include: Brac Parrot Reserve (Cayman Brac), Central Mangrove Wetland, Governor Michael Gore Bird Sanctuary, Mastic Reserve (Grand Cayman), Queen Elizabeth II Botanic Park, Salina Reserve. The Ramsar Conservation Wetland of International Importance at Booby Pond and Rookery is situated on Little Cayman. It is home to 20,000 red-footed boobies, accounting for around 30% of the Caribbean population. In 2006, UKOTCF, in consultation with local partners, identified a range of other proposed Ramsar Sites across the islands, but these have not yet been designated.

Cayman has many unique species found nowhere else. These include 20 plant species, with 26 species of orchid for example, the wild banana orchid Myrmecophila thomsoniana; 14 reptiles and amphibians including the Grand Cayman blue iguana Cyclura lewisi; 57 species of butterflies with 5 endemic subspecies of butterflies, for example, the Cayman brown leaf Memphis verticordia danielana and the pigmy blue Brephidium exilis thompsoni, one of the smallest butterflies in the world; 31 land snails and several subspecies of forest birds such as Grand Cayman parrot and the Cayman Brac parrot, as well as large colonies of seabirds.

There are nine species of bats, each specialising in a different type of food and each with a different role in the ecosystem, some have important economic value including as pollinators. The brown bat Eptesicus fuscus, has two subspecies. The Grand Cayman brown bat is considered to be a unique to Cayman and has not yet been named.

Four sea turtles occur in the waters of the Cayman Islands: green turtle Chelonia mydas, leatherback Dermochelys coriacea, loggerhead Caretta caretta and hawksbill sea turtle Eretmochelys imbricata. All are at risk of extinction due to past over-exploitations and new risks such as sea-level rise against man-made coastal defences, and unregulated coastal development.

As shallow and very deep water habitats are found here, a variety of marine mammals and other pelagic species, such as sharks and rays, are common. Research has shown that giant hammerhead and tiger sharks are attracted to the Cayman Islands by the abundance of stingray, a preferred prey item. They travel large distances to get the islands and attract a wealth of divers, and economic activity to the island.

Surveys have recorded occasional marine mammal visitors to the islands, notably the, bottlenose Tursiops truncatus and spotted Stenella frontalis dolphins. According to the Volunteer Observer Sighting Scheme, two small species of whale, short-finned pilot Globicephala macrorhynchus and beaked whales Mesoplodon spp, are “more regularly seen further offshore, around various submarine banks.” There is some evidence to suggest that the rare pygmy sperm whale Kogia breviceps “may be associated with the deep slopes of the Cayman trench.”

Spectacular coral reefs surround the islands. They include one of the world’s most popular diving locations, the Bloody Bay Wall on Little Cayman. Red-Listed critically endangered coral species found here include staghorn Acropora cervicornis and elkhorn Acropora palmatecorals. Coral reef nurseries exist to try and build resilience to the impact of climate change, including coral bleaching and disease in the Cayman Islands.

Culturally important species include the queen conch Strombus gigas and spiny lobster. The status of populations of queen conch are monitored annually both inside and outside of the Marine Park Replenishment Zones in order to ensure that their populations do not decline further and that over-harvesting does not take place.

The rapidly increasing human population, estimated to be 54,397 in 2010, is concentrated in Grand Cayman. Tourism is growing to with, in 2017, the total number of arrivals being 2,146,847, mainly cruise passengers but also large numbers staying. These factors, as well as other economic development is contributing to on-going deforestation, threatening areas such as mangrove wetlands and ancient dry forests on all three islands – which is putting the native wildlife under pressure.

The sister islands of Little Cayman and Cayman Brac are less densely populated, but also face pressures such as the impact of invasive species, e.g. the green iguana on the rock iguana on Cayman Brac and Grand Cayman.

The population of blue iguanas became so low that it was declared critically endangered. However, in October 2012, the IUCN status for the Cayman blue iguana Cyclura lewisi was improved from Critically Endangered to Endangered, thanks to the efforts of the Blue Iguana Recovery Programme, which has included a head-start facility and protection of important habitat sites across the island.

There are 30 Species Action Plans, as part of the National Biodiversity Action Plan for the Cayman Islands, which was established as part of the Cayman Islands commitment to the Convention on Biological Diversity. Plans for the most significantly damaging invasive species are included also, as they are having an impact on native fauna and flora not just in Cayman, but across the Caribbean region, e.g. lionfish and, as mentioned, the green iguana.

The National Conservation Law 2013, is the islands’ first environmental law which aims to enable the Cayman Islands to “protect and conserve endangered, threatened and endemic plants and their habitats as well as the variety of wildlife in the Cayman Islands”.

Environmental conservation is shared between the National Trust for the Cayman Islands and the local Department of Environment.

The National Trust for the Cayman Islands is working to establish a protected area system, giving priority to areas rich in biodiversity. Land owned by the Trust is protected in perpetuity. Trust nature reserves include Booby Pond and the Brac Parrot Reserve, which protects forest important for nesting of Cayman Brac’s critically endangered parrots. The Salina Reserve, Mastic Reserve and Central Mangrove Wetland on Grand Cayman protect a wide range of forest environments. The Trust works also to preserve species like the endangered blue iguana and partners with the Blue Iguana Recovery Programme established in 1990. The partnership links the Trust with the Cayman Islands Department for the Environment and the Queen Elizabeth II Botanic Park, and overseas partners, the International Reptile Conservation Foundation, Durrell Wildlife Conservation Trust and UKOTCF (via a European Union grant which UKOTCF facilitated). Their aim is to ensure a healthy population of the charismatic Grand Cayman blue iguana in protected areas representative of their natural habitat.

The government’s  Department of Environment manages an extensive system of Marine Parks in Cayman’s waters. It monitors coral reefs and works on sustainable harvest policies.

The Central Caribbean Marine Institute carries out research and supports conservation and educations efforts. The Little Cayman Research station where they are based, opened in 2003 by HRH the Earl of Wessex who is CCMI Royal Patron, dedicated the site “to sustain biodiversity so that the children of the world may forever discover the treasures of the sea”.They have a wider regional remit but supports the work of the DoE in Cayman’s marine environment.

In 2015, UKOTCF, together with many partner organisations in the UKOTs, helped Stewart McPherson with his project Britain’s Treasure Islands. As part of this, we provided information and images for, and helped to fund, a series of mini documentaries on the premise that they would be open source so that everyone could enjoy them. The Cayman Islands’s mini documentary can be seen here: