We give information about Bermuda in two main ways. Although there is some overlap, they are largely complementary. The virtual tour (opens in new window)  uses a set of standard headings for each territory and, within these headings, presents what is essentially an illustrated slide-show, which can be viewed as a whole or by its sections. (If you have a slow internet connection, it may be easier to view the virtual tour.) The articles below are more variable in format and content, as indicated by the links.

The isolated island chain of Bermuda is located in the western North Atlantic, 965 km east of Cape Hatteras, USA. With a total land area of just 55 km², the UK’s oldest Overseas Territory comprises over 150 limestone islands that sit on the largest of three volcanic seamounts formed about 110 million years ago. 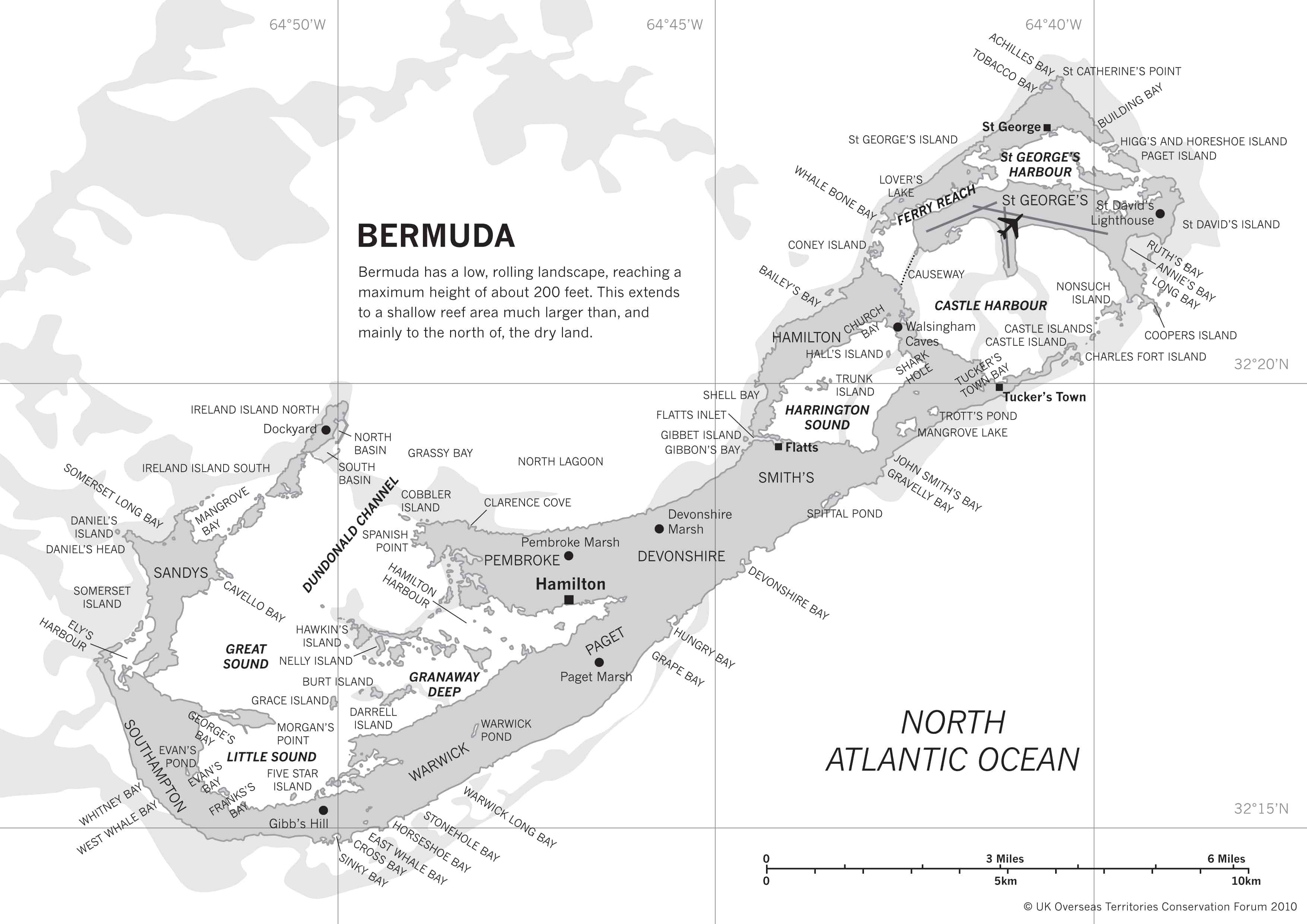 Influenced by the warm waters of the Gulf Stream, Bermuda’s shallow-water platform covers an area of about 1000 km², and supports one of the northernmost coral reef system in the world. The reefs are rich in biodiversity.

Bermuda’s climate is sub-tropical. It is mild in the winter, spring, and autumn, but warmer from late May to October, when it can be uncomfortably hot and with especially high humidity. Temperatures range between 23°C and 29°C during these months. Humidity is at its highest from July to October when it may reach 85%. Despite its northerly latitude, Bermuda is entirely frost-free, snow-free, and ice-free, due to the warm waters of the Gulf Stream which flow past. Annual rainfall is around 1450mm. Tropical hurricanes may reach Bermuda and the island has suffered several severe hits over the years.

The action of seawater on the volcanic rock flattened out the seamount. Coral reefs began to form on this platform. The remains of the reef coral and other organisms formed sediments that eventually formed the limestone rock that forms Bermuda’s surface rock. Rises and falls of sea-level during the various Ice Ages gave rise to aeolian (wind-blown) limestone formations. Since then, the constructive geological processes of sedimentation, beach formation, dune building, and the development of surface soils have, alongside the destructive processes of weathering, erosion, and human activities, continued to modify the geology of the islands.

Bermuda is generally flat with low hills interrupted by depressions. Although there are no large freshwater lakes and rivers, and only a few ponds, the vegetation is verdant due to relatively high rainfall. However, there are other inland wetlands as many sea-inlets extend inland into a wide network of caves in the limestone.

These support many endemic species, including of commercially important microbes. The system is very vulnerable to pollution and other impacts of developments on the land above them.

There are a number of Nature reserves and a number of wetland sites around the island. Of these, seven are listed as Wetland Sites of International importance under the Ramsar Convention. These are Hungry Bay Mangrove Swamp, Lover’s Lake Nature Reserve, Paget Marsh, Pembroke Marsh East, Somerset Long Bay Pond, Spittal Pond and Warwick Pond. The study by UKOTCF, commissioned by UK and UKOT governments, identified a number of further proposed sites qualifying as Ramsar Sites: Devonshire Marsh, Trott’s Pond and Mangrove Lake, Walsingham Formation and Karst Caves, Harrington Sound and Notch, Reef Areas, Castle Bay Islands and Reef.

St George and its Fortifications is listed as one of the UK’s World Heritage Sites.

In the marine environment, Bermuda sit on the only emergent seamount of the 7 seamounts within the Island’s EEZ, which comprises an area of 466,000 km2 . It is described as:

[An] oasis of life encircled by the unique ecosystem of the Sargasso Sea lies in an otherwise largely oceanic desert, and exists largely by virtue of the northerly extension of subtropical systems to this latitude – a phenomenon that can be attributed to the transport of warm waters by the Gulf Stream. Although it lies to the east of the path of this northerly flow, spin-offs bring warm water to the islands. These eddies are not predictable but are believed to provide larval transport of tropical species to the islands

Bermuda has managed this rich marine resource for over 400 years. A presentation given at the Gibraltar conference in 2015 reviewed this (see proceedings page 101).

Before its discovery and colonisation in the 17th Century, much of Bermuda was covered by Bermuda cedar Juniperus bermudiana forest. Much of this was removed for shipbuilding in the 18th and early 19th centuries. By the mid-1830s, large areas had been denuded. A subsequent decline in shipbuilding allowed the forests to recover, only for them to be badly affected again by damage caused by the introduced scale insects in the 1940s. This was probably an accidental consequence of the importation of many materials to construct American military bases during the Second World War. It is thought that up to 8 million trees were lost over the subsequent decade.

Subsequent human population increase and urban development limited the prospects of recovery. This was exacerbated by competition with fast-growing, introduced, species such as Casuarina which outcompeted the native cedars (but which are less resistant to hurricanes, allowing the latter to create more damage). A small proportion of cedar trees were resistant to a scale insect attack. In the 1980s, a concerted effort was made to propagate and restore cedars using seeds from these trees. Today, cedars are doing well in parks, nature reserves and gardens where invasive plants are managed and not allowed to overwhelm them.

Other endemic plants of note are:

Prior to human colonisation, the only non-flying vertebrate land animal was the Bermuda skink Eumeces longirostris. Bermuda skinks are critically endangered and face many threats.  Loss of natural habitat through building and development, predation from rats, cats and birds, particularly kiskadees, and entrapment in litter (like glass bottles) all affect the survival of skinks. It is protected under the Bermuda Protected Species Act 2003.

Bermuda is famous worldwide for one of the most remarkable conservation success stories, which highlights the importance of long-term programmes for species recovery.

The Bermuda petrel, or cahow, Pterodroma cahow was thought to have been extinct for three centuries. In the early 1950s, a small colony was discovered on some small offshore islets. Due to the conservation efforts of the Bermuda government, led by Dr David Wingate and supported by NGOs, the population has increased from the historic low of 18 pairs to around 100 pairs in 2016. A key element of the conservation work has been the translocation of birds to Nonsuch Island, after threatening invasives had been removed from there. This work was led by Dr Jeremy Madeiros, who took over the project following Dr Wingate’s retirement in 2000.

The translocation project led to the re-establishment of a breeding colony on Nonsuch Island for the first time in over 300 years. In 2016 there were 15 breeding pairs on the island. In partnership with the Cornell Lab for Ornithology, the Bermuda Department of Environment and Natural Resources has, for the past several years broadcast live from Burrow #831, in Translocation Colony A, on Nonsuch.

Five species of turtle occur in Bermudian waters. Of these, the green turtle is the most commonly seen. Turtles are highly migratory and are often seen far from their breeding beaches. Green turtles once bred in large numbers in Bermuda, but human predation over several centuries led to their extinction as a breeding species on the island. Several attempts were made to re-establish breeding colonies in the 1960s and 1970s, using eggs from Costa Rican beaches. Unfortunately these attempts were unsuccessful. The Bermuda Turtle Project conducts research on Bermudian turtles  and their conservation.

Since human colonisation in the 16th and 17th centuries, the flora and fauna of Bermuda have been profoundly affected by invasive species. 23 of the 100 species considered by the World Conservation Union as being the worst invasive species in the world are found in Bermuda.

Some of these have been deliberately introduced (e.g. Casuarina, feral pigs, kiskadee, anoles), some incidentally (black and brown rats), and some completely by accident (scale insects). Feral pigs are thought to have been a major contributor, along with human harvesting, in the decline in numbers of the cahow, which was absent from the main islands by the end of the 17th century. Feral cats and dogs are a growing problem for Bermuda’s population of white-tailed tropicbirds.

There are several examples of animals being introduced to Bermuda to control other introduced species, only to become problematic themselves. The Bermuda cicada has not been heard since the 1990s –  a victim of the decline in the numbers of Bermuda cedar and predation by introduced predators.

Despite a long history of conservation, the Island’s conservation agencies are faced with a challenge. Bermuda’s low-rolling hills are largely suburban in character, supporting a resident population of over 60,000 concentrated on the 7 largest islands. The islands have one of the highest population densities in the world. Economic growth, based on international financial services and tourism, attracts 500,000 visitors each year. It’s natural environment has been highly modified by human activity. The pressure for development, coupled with the ever-increasing problem of introduced species, pose an escalating threat to the fragile ecology of the Island. The former Bermuda Ombudsman gave a presentation at the UKOTCF-organised conference in 2015 (see page 99 of the proceedings)

Organisations such as the Bermuda Audubon Society and Bermuda National Trust have focused on the acquisition, restoration and management of critical habitats, most notably wetlands, as well as conservation advocacy. The Bermuda Zoological Society meanwhile has concentrated on promoting environmental education and community participation in in-situ research and conservation activities. All work closely with the Bermuda Government’s former Conservation Services Department, now the Department of Environment and Natural Resources. These have several invasive species management plans.

Scientists at the Bermuda Institute for Ocean Sciences have studied the ocean around Bermuda for over 100 years. The long-term datasets they have collected are important in studying long-term environmental changes. William Beebe’s pioneering exploratory deep-sea dives in the bathysphere in the 1930s off Nonsuch Island further focused the world’s attention on seas surrounding Bermuda.

The coral reefs surrounding the island are richly biodiverse. The coral reefs are threatened by pollution, impact, climate change, and sedimentation. The Living Reefs Foundation is working to preserve the remaining 440 square kilometres of Bermuda’s unique northerly coral reef ecosystem.

Buy Back Bermuda, a joint partnership between the Bermuda National Trust and the Bermuda Audubon Society, began over a decade ago, as a way of ensuring green spaces, particularly wetland habitat, are protected in perpetuity for the people of Bermuda as places to educate and enjoy the outdoors. It is a community-wide fundraising campaign to purchase and save open space in Bermuda and has raised over $4 million since it began. It is ensuring the conservation of acres of open space including: Somerset Long Bay Nature Reserve (opened in 2007), Vesey Nature Reserve in Southampton (2007) and Eve’s Pond, Hamilton Parish (2012) with plans for further purchases in future.

In 2015, UKOTCF, together with many partner organisations in the UKOTs, helped Stewart McPherson with his project Britain’s Treasure Islands. As part of this, we advised on, and helped to fund, a series of mini documentaries on the premise that they would be open source so that everyone could enjoy them. Bermuda mini documentary: