We give information about the British Virgin Islands in two main ways. Although there is some overlap, they are largely complementary. The virtual tour (opens in new window)  uses a set of standard headings for each territory and, within these headings, presents what is essentially an illustrated slide-show, which can be viewed as a whole or by its sections. (If you have a slow internet connection, it may be easier to view the virtual tour.) The articles below are more variable in format and content, as indicated by the links. 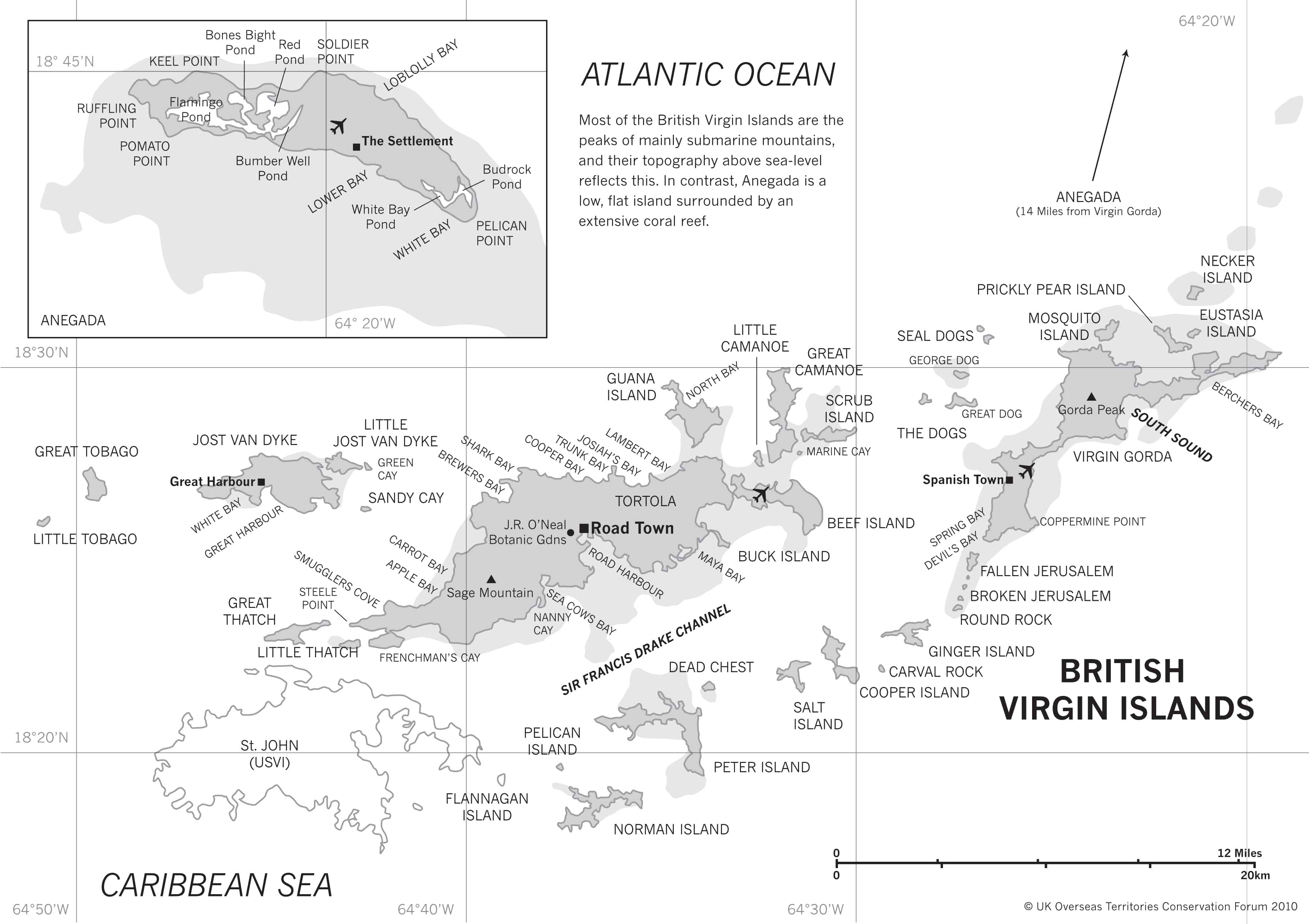 Each island has many scenic secluded beaches, giving way to crystalline blue waters. The Virgin Islands – inclusive of both the US and the British – are part of an oceanic volcanic arc, which starts with Cuba and ends with Trinidad, off the coast of Venezuela. One-hundred million years ago during the Cretatious period, the Atlantic plate subducted underneath the Caribbean plate which, over time, caused the Virgin Islands to form as a volcanically active arc. Today, the islands are no longer volcanically active, although movement along the Caribbean-Atlantic plate boundary (still active to the south, in the Lesser Antilles) causes frequent earthquakes on the islands. As such, the central geological component of the British Virgin Islands is their bedrock of basaltic igneous rock, geomorphologically folded as hot and malleable lava cooled into hardened rock upon reaching the surface of the geological tumult.

The maximum elevation is 585m, on Sage Mountain, Tortola. Most of the islands are hilly, but the northernmost, Anegada is geologically different, a low-lying limestone island.

The climate in the British Virgin Islands is tropical, hot throughout the year, and influenced by the trade winds. With a warm period from December to March, when the daily average temperature is around 24/25°C (75/77°F), and a hotter and sultry period, from May to October, when the daily averages are around 28°C (82°F). The annual amount of rainfall is around 1,000-1,200 mm (40-47 in) per year.

The months June through November are known as hurricane season in the British Virgin Islands (and elsewhere in the Caribbean). As was evidenced especially severely during the hurricane season in 2017, hurricanes are not only increasing in frequency, but also in ferocity. With hurricanes Harvey, Irma (the strongest hurricane since records began) and Maria battering islands throughout the Caribbean in quick succession, the latter two caused massive damage to both the environment and the infrastructure of the British Virgin Islands. Like many Caribbean Islands, BVI has had a varied history of human occupation, from Amerindian pre-European occupation, changing ownership amongst European countries, pirates, plantations, slavery, part of the British Empire and currently status as a UK Overseas Territory. Discovered by Columbus in 1493, the islands came into British possession in 1666 when planters took control from the original Dutch settlers. The islands were annexed by the British in 1672. In 1872 they were incorporated into the British colony of the Leeward Islands. These islands were administered under a federal system until 1956 when the Federation was dissolved. The Governor of the Leeward Islands continued to run BVI until 1960 when an appointed Administrator (later a Governor) assumed direct responsibility. The adjacent US Virgin Islands were previously Danish, until 1917.

The islands’ vegetation is predominantly made up of cacti, thickets and dry forests. There are also rain forests on the upper slopes of the larger islands of Tortola and Virgin Gorda. Also present within the BVI are woodlands and shrublands. Marine environments of the BVI consist of 380 km² of coral reefs that range in size from small fragments of a few square metres to the Anegada reef which is made up of close to 77 km² of coral. Anegada is also the home of the Anegada Horseshoe Reef which is the third largest barrier reef in the world. The archipelago also has 580 hectares of mangroves (of which 75% are found in Anegada). There are also sea grasses, sandy stretches, salt ponds, ghauts and sub-marine hills and vales. In conjunction with BVI colleagues, in 2006 UKOTCF, partly under contract to UK Government, identified a number of these wetlands as proposed Wetlands of International Importance under the Ramsar Convention. One Ramsar Site, Western Salt Ponds of Anegada, had already been designated but designation of the others is awaited.

Intensive scientific research has been carried out on the privately-owned island of Guana since the 1970s. These studies have documented much of the biodiversity that occurs on the island and in the surrounding waters. To date, Guana Island is richer in recorded flora and fauna for its size than any other island studied in the Caribbean, and possibly the world. This is surprising, as ecological theories of biogeography – predominantly niche space dynamics – predict that the number of species found on Guana Island should be much lower than it actually is, given the island’s size. Perhaps this simply underlines the probable richness of other islands if studied. To date 360 (11%) of the 3,315 native species on BVI have undergone assessment against IUCN Red List criteria. Of the 360 native species, forty-seven are Globally Threatened, with a further twenty-one Near Threatened and twelve Data Deficient. The remaining 280 assessed native species are of Least Concern.

The British Virgin Islands are important for Caribbean reptiles. According to a review conducted in 2010, by Amphibian and Reptile Conservation, thirty-one indigenous (eight of which are endemic) and six introduced species of amphibian and reptile are found in BVI.

The Critically Endangered Anegada rock iguana Cyclura pinguis is strictly endemic to Anegada. A head-start facility exists in order to protect this species. Other endemic species include: the anole Anolis ernestwilliamsii, the Virgin Islands dwarf gecko Sphaerodactylus parthenopion and Virgin Islands bronze skink Spondylurus sloanii. A number of other species are endemic to the Puerto Rican Bank including the VI and Puerto Rico.

The satyrine butterfly Calisto anegadensis, is endemic to BVI and only on Anegada Island. The islands have many endemic species of invertebrates. Although some collections have been conducted, much more work in this area is needed to understand their importance to the islands ecosystems.

Eighteen West Indies roseate flamingos were reintroduced to Anegada in 1992, where a colony of fifty-one flourished by the year 2000 (see banner image at top).

Threats to biodiversity in the BVI include natural disasters driven by climate destabilisation, as well as man-made factors such as regional development for both industry and tourism. Some of the more common threats to biodiversity include habitat loss/fragmentation, sedimentation, anchor damage, marine pollution, insensitive development, increasing sea temperatures and invasive species. The loss of mangrove to built development has long been a concern locally. This means that the islands lack this aspect of their natural protection from hurricanes.

Introduced invasives,  Cuban tree frog, mongoose and feral rats and cats, threaten the native species. In the marine environment, the introduced lionfish has an impact on marine life and thus the fisheries industry, although fisher-folk are being encouraged to catch them given their high protein value and good taste.

Discarded fishing line and other non-bio-degrading waste causes considerable problems, including killing a number of magnificent frigatebirds in their colony at Great Tobago, near Jost Van Dyke.

Higher global temperatures and sea-level rise together with an increase in the frequency and intensity of hurricanes and associated flood events are of great concern. For example, an increase in temperature will put 20% to 30% of local plant species at greater risk of extinction, in addition bleaching of coral reefs, one of the tourist attractions; is likely to occur.

J.R. O’Neal Botanic Gardens, established in 1979, are a cool and peaceful refuge located in the centre of Road Town. The four-acre gardens include indigenous and exotic tropical plants, and are managed by the National Parks Trust. In partnership with Royal Botanic Gardens, Kew, a strategy was developed to give more focus to conservation and education. Several threatened native species have been established in cultivation in the J R O’Neal Botanic Garden by members of RBG Kew’s conservation team. These include the scrambling cactus, Leptocereus quadricostatus, and Malpighia woodburyana. The Gardens were badly damaged by Hurricane Earl in August 2010. Sixty-six mature trees were uprooted or damaged. The nursery, fern house and pergolas were damaged. The gardens remained closed during clean-up operations until November 2010. Further extremely severe damage was sustained in 2017 during Hurricanes Irma and Maria, rebuilding of this important conservation facilities has started.

Away from Tortola, Anegada, the second largest island in the BVI, has exceptional biodiversity and important habitats, the reason that part of it is designated Wetland of International Importance, under the Ramsar Convention, and other parts identified as qualifying for designation. A Biodiversity Action Plan for the site has been developed.

Jost Van Dyke, the fourth largest of the inhabited British Virgin Islands, faces the challenge of balancing economic growth with sustainable use of its natural resources. Little scientific information about Jost Van Dyke was available, so an Environmental Profile was produced for Jost Van Dyke and the nearby islands of Little Jost Van Dyke, Sandy Cay, Sandy Spit and Green Cay (the last three proposed as protected areas under the BVI’s Protected Areas System Plan). Information about the findings of the project was disseminated to JVD residents, visitors and other stakeholders, and a programme of education, outreach and environmental monitoring was initiated. Following this the, Island Resources Foundation produced also comprehensive environmental profiles for Virgin Gorda and Anegada.

Jost Van Dyke Preservation Society is a small non-government organisation based on the island aiming to conserve its previous natural environment and educate the community. It works with a variety of international partners.

A number of terrestrial and marine projects are undertaken in partnership with others based off island. One example is the management of lionfish Pterois volitans in coastal waters. This project provides a framework to coordinate activities among government and non-governmental agencies, local businesses and organisations to prevent the lionfish from further negatively impacting the Virgin Islands fisheries and marine ecosystems and endangering public safety.

A long-term programme, by the NPTVI, in partnership with the RBG Kew, funded by several Darwin Initiative awards, is the conservation of BVI’s flora. Nine vascular plant species have been identified as BVI endemics, or near-endemics of limited distribution, and labelled as “Red List Candidates”. This report can be downloaded here. Threatened species in cultivation at RBG Kew include Cordia rupicola and Metastelma anagadense found on Anegada.  Other work by RBG Kew’s botanists includes evaluation of the status of Virgin Gorda’s special plants.  Gorda Peak National Park is home to the five endemics – Zanthoxylum tomasianum, Machaonia woodburyana, Calyptranthes thomasiana, Calyptranthes kiaerskovii and Croton fishlockii.

The Management of Protected Areas to Support Sustainable Economies (MPASSE) project, partly funded by the EU, was a regional project involving UKOTCF, the National Parks Trust of the Virgin Islands, the National Trust for the Cayman Islands – specifically its Blue Iguana Recovery Programme – and the Turks and Caicos National Trust. The project aimed to develop environmentally sensitive and sustainable visitor facilities in the three territories as well as facilitate conservation.

A virtual tour for BVI, outlining its natural, historical and cultural importance is available here.

In 2015, UKOTCF, together with many partner organisations in the UKOTs, helped Stewart McPherson with his project Britain’s Treasure Islands. As part of this, we helped to fund a series of mini documentaries on the basis that they would be open source so that everyone could enjoy them. BVI mini documentary: